In a follow up to my article last week about a trip to see the Oregon Museum of Science and Industry’s Mythbusters exhibit where I noticed some mythbusting of OMSI’s own at Life Hall, I also noticed some myth perpetuation in Earth Hall. Policy mythmaking centers on the problem of obtaining political consent when a prescribed policy is too far outside the core values of the average voter. Complex arguments involving esoteric and distasteful premises get replaced by an easier, more attractive, but factually challenged narrative for public consumption. Without this deceptive framing of an issue, elite insiders worry that their goals could never attract popular support so they compensate accordingly.

The left wing professor of linguistics at MIT Noam Chomsky coined a term for this phenomenon: manufacturing consent. Of course he was writing about foreign policy, attempting to explain the popularity of the Cold War by showing how established elites craft a catchy narrative and reinforce it throughout the mainstream media and major cultural institutions (such as museums) to regulate public opinion. The application of this concept of his can be seen in several other policy areas, none of which is more salient than environmental policy.

OMSI’s Earth Hall currently hosts an exhibit that serves as a glaring case study of policy mythmaking in the pursuit of manufactured consent. Financed by stakeholders in the government subsidy of alternative forms of electric generation like wind turbine maker Vestas and solar panel maker Solarworld, this paid advertisement perpetuates the biggest whopper of the green tech gravy train, that the reduced use of cheaper fossil fuels will be better for economic growth. This exhibit comes complete with a large set of building blocks for kids to assemble the asserted three pillars of alternative energy, that it’s not just better for the environment, it’s better for society, and even better for the economy too. 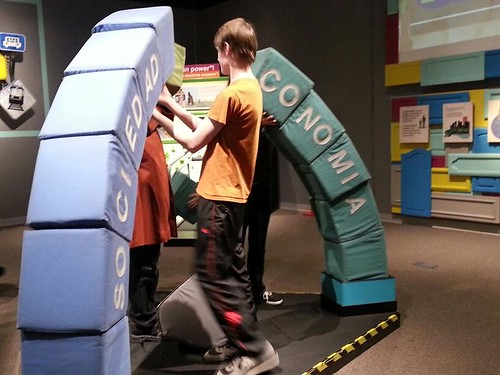 A truly scientific exhibit would do more than just lay out all the environmental costs that come from our use of coal, oil, and gas. Even if it were to include the advocacy that we as a society should accept an economic tradeoff by substantially reducing our standard of living to protect the environment, to remain scientific on this matter, OMSI needs to honestly display those costs. The full social implications we face for moving towards a reliance on extremely expensive, low yielding forms of electric generation are far easier to measure than the results of over-determined complexity in climate models that make macroeconomics look like an exact science by comparison.

A war on cars for example will have enormous economic collateral damage. The failure to spend the user- generated revenue of gas taxes and vehicle registration fees on maintaining and expanding our roads will have a serious negative impact on real people’s lives. For all the talk of a new bridge across the Columbia River, not far away we find scarce transportation dollars quietly being blown on the construction of a new bridge across the Willamette River that intentionally won’t even allow cars. Channeling people into the use of a slow, low capacity mode of transportation like MAX will negatively affect real peoples’ mobility.

Check out this video from the exhibit:

Notice how it claims allowing cars to cross the new bridge would increase both pollution and traffic jams. This is intentionally deceptive. Creating more capacity for vehicular travel will reduce traffic jams not increase them. This is somewhat related to an analogy commonly cited by Metro planners in public, that expanding our highway infrastructure is like a fat person buying ever larger belts. This is a false analogy, failing to expand our roads in a modest sized city like Portland as we grow in population is more analogous to failing to buy a new belt for a growing teenager. Economic growth brings with it not fat but simply the need for greater freeway capacity.

Amongst themselves Metro planners are more candid. “Congestion is our friend” they tell each other as plans are hatched to force people out of their cars. To reduce pollution we have to coerce people out of their preferred means of transportation and onto MAX by making it more and more difficult to get around by car. Manufacturing consent requires the reduction of peoples’ overwhelming choice in the name of adding more choices; it requires intentionally creating more traffic jams while telling the common folk we are trying to reduce traffic jams.

To ignore the devastating economic tradeoff of such reduced mobility amounts to myth creation. It’s an attempt to hide a thinly supported ideology from popular scrutiny. The throughput capacity for MAX is so astonishingly low, and its speed is so frustratingly slow, there would be huge lines waiting to get on and off crowded trains if anything beyond the tiny fraction of our local population that uses MAX today began riding them. The pollution from cars is very real  and has continued to decline even as more people ride in them, but the motor vehicle’s unrivaled efficiency at moving people around a city remains irreplaceable and the negative economic consequences of disrupting a city’s real transportation needs far exceed the  actual costs of the additional pollution Metro planners are trying to reduce.

Does OMSI’s exhibit mention any of this? No, instead it includes a small mock up of a MAX train encouraging more people to ride them. 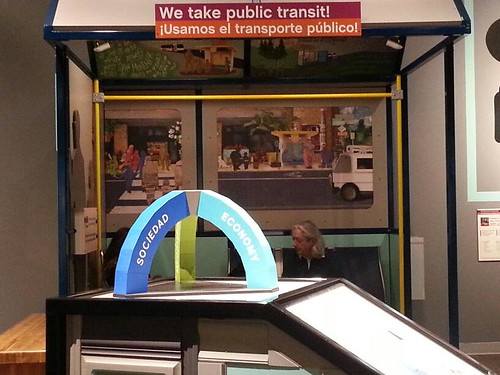 Efficient transportation options don’t require propaganda like this. Maintaining the actual infrastructure we need to grow as a city does not require the manufacture of consent.

The subsidy and cartelization of alternative energy and light rail is certainly good economically for those who stand to profit from the public’s expense at Vestas and Solarworld, but not for society at large. Whether or not we should accept that tradeoff is one thing, allowing these stakeholders to use OMSI as a propaganda tool to trick people into thinking no such tradeoff exists is another.

Relying on myth to hide their ideology, Metro’s agenda is actually quite vulnerable even in Oregon. It will just take some empirical exposure, some intellectual sunshine to disinfect the pervasive top-down propaganda. OMSI is great, but don’t expect it to do that job anytime soon in the area of environmental policy. Fortunately our state has some mythbusters of our own at the Cascade Policy Institute. Invest in freedom by donating here.