Violence Policy Center data confirms that Oregon concealed handgun license (CHL) holders are hyper-law-abiding citizens, which is logical since CHL holders have to pass an FBI criminal background check to obtain their CHL. 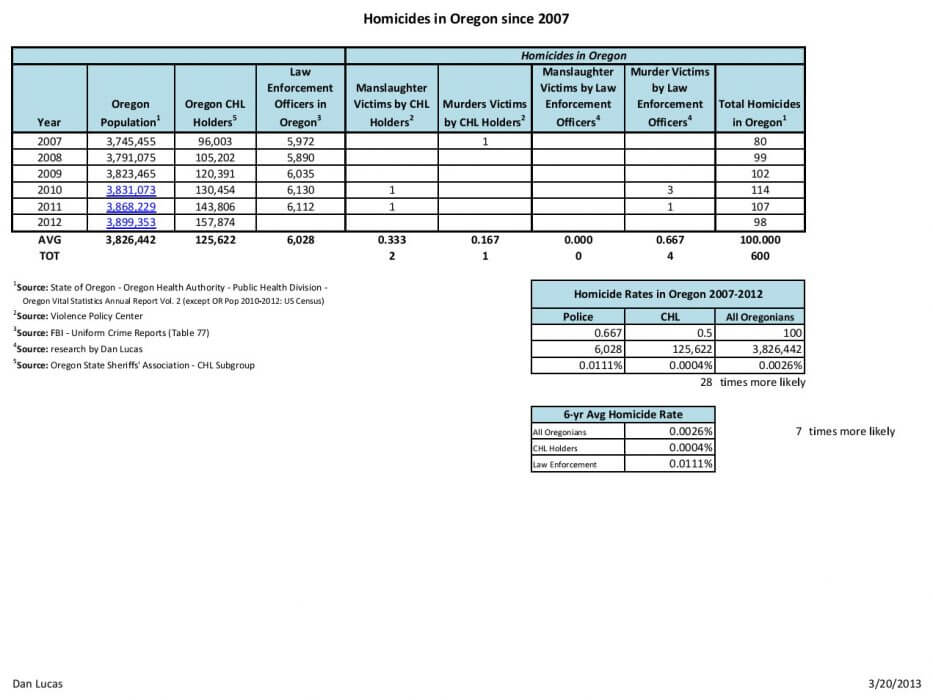 For a PDF version of this table, with hyperlinks, please click here.

The Violence Policy Center maintains a collection of information from May 2007 to the present on non-self-defense shootings by concealed carry holders, which facilitated this analysis.

The Violence Policy Center “Concealed Carry Killers” numbers also include the shooters if the shooters committed suicide, which overstates their numbers. None of the Oregon CHL holders who committed homicide also committed suicide, but one of the Oregon law enforcement officers did after murdering three people – and so if this analysis used the Violence Policy Center’s methodology, law enforcement officers would be 35 times more likely to commit homicide than CHL holders in Oregon.

This is not an attempt to disparage law enforcement officers in Oregon or average Oregonians, but it is to demonstrate that CHL holders are hyper-law-abiding citizens. As state Rep. Jeff Barker (D-Aloha) said back in 2011, “As a retired police officer with over 31 years of law enforcement experience in Oregon, I can tell you that concealed handgun license holders pose no threat to their neighbors.” Rep. Chris Edwards (D-Eugene), talking about CHL privacy rights in 2009, referred to CHL holders as “the good guys.”

Additional resource: Homicides by Oregon Law Enforcement May 2007 to Present