Salem, OR – Legislative Democrats forced a feeble Public Employee Retirement “reform” bill across the Senate floor today on a purely partisan vote. House Democrats have refused to work with Republicans on a bi-partisan, compromise proposal, forcing a vote on a bill that leaves schools underfunded and local governments bearing the brunt of a broken retirement system.

“Oregonians are expecting PERS reforms that will put more resources into classrooms and provide long-term fixes to the systematic flaws in PERS; SB 822 fails to accomplish that,” said Senate Republican Leader Ted Ferrioli (R-John Day). “Republicans stand ready with solutions and a desire to collaborate. When Democrats are ready to work together, we’ll be waiting.”

Senate Bill 822 has become known as the “PERS Lite” bill because of the weak set of reforms it implements and the minimal savings it achieves and passes on to the classroom. What’s more, Senate Bill 822 employs a “skip-a-payment” scheme by moving more than $350 million of PERS payments from this budget cycle to the next, effectively borrowing money.  Republicans don’t believe going into more debt helps fix a retirement system already underwater.

“My dad always told me it was a bad idea to use the ‘skip-a-payment’ offer from a credit card, and apparently this legislature could use some of his advice,” said Senator Bruce Starr (R-Hillsboro). “In that sense, SB 822 is actually a step backwards. It increases the future costs to classrooms and ultimately costs taxpayers more money and services.”

Using a series of parliamentary moves, Republicans offered their own menu of more comprehensive reform ideas, including a stair-stepped COLA limitation, eliminating money match for inactive PERS members, allowing employers to negotiate on the 6% pick-up, taking legislators out of PERS, and eliminating non-resident tax remedies. In total, their reforms save around $2 billion. The Republican proposals were all defeated on party-line votes.

“There are better solutions to this problem,” said Senator Alan Olsen (R-Canby). “With bolder reform, kids can have a longer school year, smaller class sizes, and better learning environments.”

A broad coalition of Oregon editorial boards and groups like Stand for Children, the Oregon School Boards Association, and the Oregon Business Plan are calling SB 822 an inadequate solution to the PERS problem.

The Oregon House Republican Office has produced this Top Ten list of hot editorial quotes by Oregon newspapers on the tepid PERS reforms the Democrats have put forward. 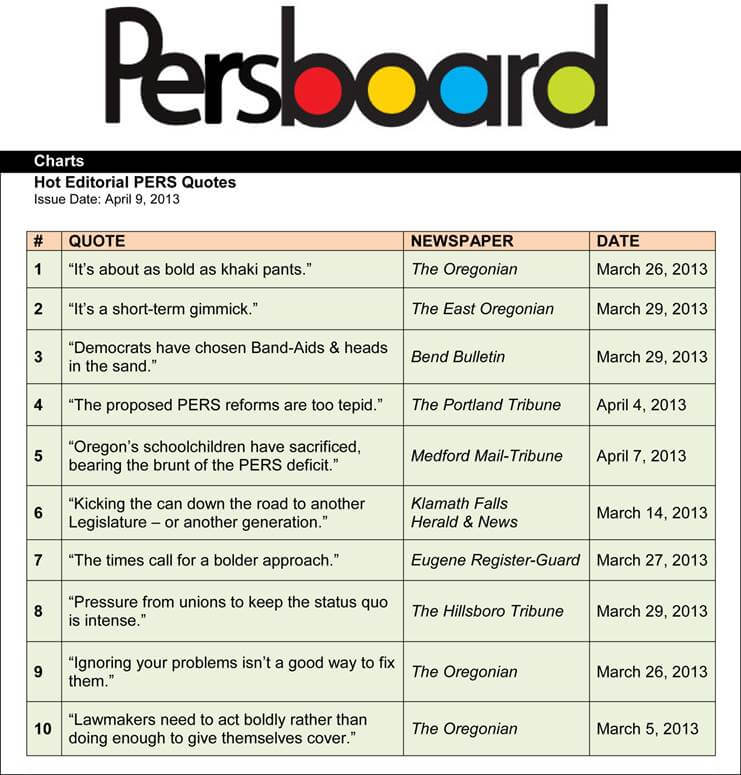