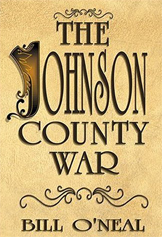 I just finished reading a fascinating book entitled The Johnson County War by Bill O’Neal. It is the well-documented history of one of America’s most famous range wars. The setting is Wyoming during the later 1880’s and early 1890’s. Owen Wister would subsequently use the true tale of the Johnson County range war as the setting for his famous novel The Virginian, which would later be made into a television series of the same name. This range war also inspired the movie classic Shane starring Alan Ladd, and the one of the all time movie disasters, Heaven’s Gate.

It is the saga of wealthy cattle barons who made their fortunes using the open ranges of Eastern Wyoming. The cattle barons are pitted against a ruthless band of rustlers centered near Buffalo (Johnson County), Wyoming. These rustlers are interspersed among newly arrived homesteaders and, at times, it is difficult to tell one from the other. The rustlers ride out of the protected environs of Johnson County and ravage the untended herds of the cattle barons who are using the vast open ranges to winter their cattle.

Each side had its own private army, most of whom in some fashion or another were loosely affiliated with local law enforcement (sheriffs, marshals, livestock inspectors and private detectives). The rustlers of Johnson County were virtually immune from prosecution because their neighbors refused to find them guilty of stealing from the cattle barons. The cattle barons were virtually immune from prosecution because they controlled the governor, the judges and law enforcement in the state capitol. Even Wyoming’s two powerful United States senators and the president were beholden to the cattle barons.

Frustrated at the inability to obtain conviction of known cattle rustlers, the cattle barons employed an army of gunfighters, composed mostly of Texas lawmen, and rode with them in to Johnson County to take law into their own hands. They hung several suspected rustlers and in doing so raised the ire of the Johnson County citizens who organized their own small army and rode out to confront the cattlemen at the KC Ranch. A tense standoff was resolved by the arrival of a reinforced United States Calvary — sent by President Benjamin Harrison at the request of the cattle barons made through Wyoming’s two United States Senators.

The Calvary refused to turn the invading cattlemen over to local authorities where they would have surely been lynched. The cattlemen used their vast influence and resources to affect a transfer of jurisdiction for the trial to their friendly venue of Cheyenne. Witnesses disappeared, justice was purchased and, in the end, the cattlemen went free — many of whom went on to be some of Wyoming’s most important citizens and politicians, including governors, senators, judges and even a United State Supreme Court justice.

It was a great read and made better by the knowledge that all of this occurred in an area of the Old West not far from where I was born and raised in Eastern Montana.

And so what does this have to do with today?

Well, as you intermittently read this book and today’s news you are struck by the parallels between this range war and the internal struggles of Iraq and Afghanistan. In each instance there are “war lords” who command substantial regions of the country, each with their private armies, often engaged in class warfare struggle and each imposing horrendous and murderous retribution on each other with seeming impunity because they control “justice” in their respective regions.

The difference is that at the time of the Johnson County range war (1892), our democracy was slightly over one hundred years old. In contrast, the newly emerging democracies of Afghanistan and Iraq are less than three years old. Why is it that we demand of them a level of sophistication and adherence to democratic principles that escaped vast sections of the United States for over one hundred years?

And one last item. Each side in the Johnson County range war had their own press — bought and paid for. Each thoroughly “independent” news organization spun the events in a light most favorable to their political adherents. This element struck a nerve this week when we learned that Reuters, the international “news” agency, used doctored photos to create international criticism of Israel about non-existent events in its recent clash with Hezbollah. It is reminiscent of the politicos using Dan Rather’s well known biases to front the phony documents about President Bush’s air national guard service.

So what have we learned since the Great Johnson County range war? Apparently nothing.