I was first elected to the legislature in 2002, yet I am still surprised by the political “blame game” that occurs at the end of most Legislative Sessions. [To see a brief YouTube on this subject, click here.]

Last week, Oregon Governor John Kitzhaber spoke to the House Republicans and requested an additional $275 million in tax increases. He promised that if Republicans joined the Democrats in voting for tax increases the additional revenue would enable the legislature to help publicly funded K-12 schools, community colleges, universities and youth mental health programs. In other words, “it’s for the kids.”

I reminded the Governor that,

I also reminded the Governor that, notwithstanding the $1.9 billion of additional revenue, he and his party are once again holding the K-12 school budget hostage, and acting like a tax increase is required to fund it. It’s an obvious set-up. If the Republicans fail to agree to the proposed tax increases, the Democrats will, once again, play the “blame-game,” and accuse Republicans of neglecting children, hating schools and abandoning seniors. This is a transparent and unfortunate case of playing political games instead of focusing on actually helping the kids and other Oregonians.

So where did the $1.9 billion go that could have funded education first and provided certainty to school districts in March instead of June? It went to myriad programs and agencies that the Democratic leaders apparently consider higher priorities than jobs, education and fixing the Public Employees Retirement System (PERS).

Kitzhaber wants money for ObamaCare – not for schools

One example is the multi-billion dollar Oregon Health Authority (OHA) Budget. The OHA will implement the new federal  “Affordable Care Act” (ObamaCare) in Oregon and provide government paid or subsidized health care to families earning up to 400% of the federal poverty level. (A family of four earning $94,000 will be eligible for subsidized health insurance paid by lower-earning taxpayers.) Expansion of OHA’s health plans is expected to cause a $1 billion funding hole in 2015 State Budget and cost an additional $1.5 billion in 2017. (See Chart Below) In addition, it is expected to raise the cost of individual health policies through the roof—especially for younger adults 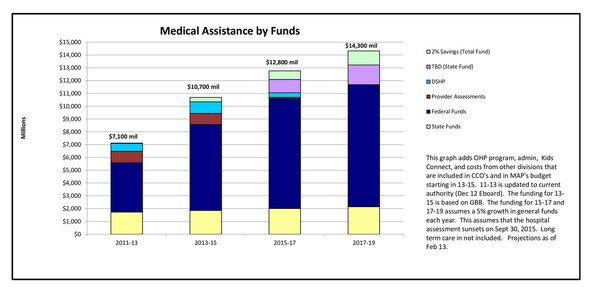 In the past, when Democratic leaders played the end-of-session blame game, they deceived many members of organizations like Stand For Children and other voters, but not anymore.

In the past, when the Republicans controlled the House or the Senate, the Democrats’ media machine would convince the media and voters that more money would have been spent for the children, if only the recalcitrant Republicans would have allowed compassionate Democrats to be more generous.  This time the Democrats are in charge and there is no place to hide.

When the drama of this legislative session is over it will be clear, the Democrat leaders controlled everything—the House, the Senate and the Governorship—and they had a 12% increase in revenue to allocate any way they chose in the 2013-15 State Budget.

If passing the K-12 school budget was a priority, the Democrat leaders had plenty of money to do so early in the session and give much-needed certainty to Oregon school districts. The School Budget could have been passed in March, just like we did in 2011 when the Republicans and Democrats shared leadership and I was at the table with the other Co-Chairs.

If lowering PERS rates and paying off the $14 billion PERS liability was a priority for the Democrats, it would have been done months ago. Instead, the Democratic leaders passed Senate Bill 822 without a single Republican vote. As you may recall, SB 822 reduces benefits for those who already have retired and “kicks the can down the road” by failing to make $350 million in payments due in 2013-15.That is like failing to make a huge credit card payment when its due and promising to pay it back with interest later. In short, the plan is to pay lower rates now and higher rates starting in 2015. The cost for avoiding the $350 million in payments will be $500 million in lost investment proceeds and another $500 million in additional interest over the next 22 years. (click here)

The Republicans, Stand for Children, the Oregon School Boards Association and the Oregon Business Council for months continued hoping for hearings on various PERS reform ideas. There were 35 PERS reform bills and the Speaker of the House Tina Kotek (D-North/NE Portland) and Senate President Peter Courtney (D-Salem) refused to allow any of them to receive serious consideration. Even now, Republicans are offering alternatives that would substantially reduce the $14 billion PERS liability over time. In fact, they’re willing to compromise on raising more revenue, if it would result in a deal that finally would solve the PERS crisis. As one legislator said it, “we’re even willing to pay the Speaker [with more revenue] to do the right thing and fix PERS.”

Unfortunately, when it comes to PERS, our legislative leaders listen only to the public employee unions (the coalition of the status quo), and not to the cries from school districts that face laying off more teachers to pay the exorbitant Tier 1 PERS rates. In the current biennium (2011-13) PERS employer payments increased by $1.1 billion.

More specifically, in the current biennium school districts have been paying to PERS an average of 19% of payroll. That is an increase from the previous biennium (2009-2011) for schools when the average was 14% and most of the increase is from the outrageous cost of Tier 1 PERS benefits. While I do not fault individual PERS members for taking as much in retirement as PERS will allow, I do fault the legislature, the public employee unions and the Democratic leaders who cower to them for failing to curb those benefits as much as legally possible without violating the PERS contract.

Without fixing PERS, public employers will continue bearing the $1.1 billion in PERS employer cost increases, plus even more in 2013-15. Such skyrocketing PERS increases drain millions from the budgets of our State, our schools, our counties, cities, fire districts and the remainder of the 900 PERS employers in Oregon.

Without fixing PERS, such huge PERS employer payment increases are budget-crushers that will reduce the quality of our children’s education and all other important state and local government services .

In conclusion, as the end of the 2013 legislative session approaches, when you read the political “spin” about how the Republicans supposedly failed to provide enough money for “the kids” and for the mentally ill and for the seniors, remember the $1.9 billion in extra revenue, and those in power who placed a higher priority on expanding ObamaCare than the early funding of our schools. Remember who failed to fix PERS because of pressure from the coalition of the status quo.