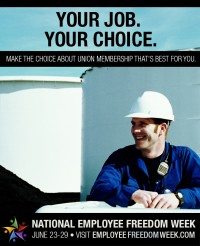 Right to Work policies in 24 states allow workers the freedom to join or not join a union. Oregon, however, is one of the 26 states without such employee freedom. Here, if a workplace is organized by a union, workers must either join the union and pay dues, or opt out of membership but still pay what are called “fair share” dues, supposedly to cover the cost of negotiating and upholding their employment contracts.

Why might workers like the opportunity to opt out of union membership? Some believe they can make better use of their own money rather than giving it to a union. Others “vote with their feet” against what they perceive to be poor union service or negotiating results. Still others leave because they oppose their unions’ political positions. They simply don’t want to support any organization that doesn’t share their political beliefs, whatever those might be.

Last year, Cascade Policy Institute conducted ground-breaking research on the economic benefits of allowing Oregon workers to opt out of union membership and “fair share” dues. Our February 2012 report concluded that, upon enactment of a full Right to Work policy, Oregon would have:

All these economic benefits would occur without spending one dime of taxpayer money.

So, how many workers might completely opt out of their union if they could? To answer that question, beginning in mid-May 2013 a coalition of non-profit groups across the country conducted a series of union household Google Consumer Surveys, including some 500 valid respondents throughout Oregon. Survey results were released at the beginning of National Employee Freedom Week (June 23-29).

All survey respondents were asked:

If it were possible to opt out of membership in a labor union
without losing your job or any other penalty, would you do it?”

In Oregon, 31.2% of respondents answered Yes.

These results are bolstered by the fact that last year only 70% of workers in bargaining units represented by Oregon’s largest public employee union chose to be union members. According to SEIU’s Local 503 annual report submitted to the federal Department of Labor, the other 30% had opted out of membership but were still required to pay “fair share” dues. If Oregon were a Right to Work state, these workers could opt out entirely. Soon, they may be able to do just that.

A citizens’ initiative known as IP9 is awaiting final ballot title approval from the Oregon Supreme Court before collecting signatures for placement on the November 2014 ballot. It would allow Oregon public employees to opt out of membership and any dues payments to a union they don’t wish to support.

The Right to Work without third-party interference is more than an economic issue; it is a profoundly moral one as well. In America, no one should be compelled to join a union or to pay union dues in order to hold a job. Hopefully, before long Oregon will grant true employee freedom to every public and private worker in the state.

Steve Buckstein is the founder of Cascade Policy Institute, a free-market think tank based in Portland.