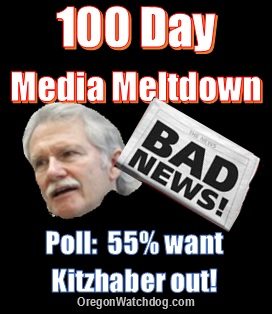 A new Oregon poll by national pollster, Wenzel Strategies, and the Taxpayer Association of Oregon PAC shows that voter sentiment to replace Governor John Kitzhaber has now reached the majority of Oregon voters.

– A surprising 55% of voters told pollsters it is “time for someone new” to be governor. (Poll Data)

– This is 6% higher than a similar Oregon Public Broadcasting poll done the previous month where 49% of Oregon voters said Kitzhaber “should not be re-elected”. (1)

“The spike of Kitzhaber negativity can be directly attributed to a recent string of bad news national in scope over Oregon’s performance, for what we are calling the 100 Days Media Meltdown”, says Jason Williams, Director of the Taxpayer Association of Oregon PAC. Williams explains, “In the past 100 days, there have been seven colossal Oregon failures stories, with many of these headlines carrying a national perspective.

1. In March, the 2014 Special Session ended with no CRC bridge plan which became a regional disaster after wasting an extraordinary $200 million of taxpayer dollars with no bridge.

2. In April, Oregon was rated among the nation’s 5 worst DMV wait lines (2)

4. In May, Oregon was rated among top 5 food stamp states in the nation (3)

5. In May, Oregon scored the lowest labor participation rate on record (4)

6. In May, Kitzhaber had to pull his healthcare policy advisor from nomination further expanding his health care debacle. (5)

7. In June, Oregon was rated as having the 5th worst waiting time for veterans new patient primary care.” (6)

“All of these stories show how Kitzhaber’s failures impact people’s everyday lives (DMV wait times, veteran wait times, highway traffic jams, record job losses) only to be compounded by national news that we fare worse than other states. The two forces working together create a stark repulsion and fatigue with Governor Kitzhaber’s failed governorship. It is going to be hard for Kitzhaber to undo the failure that people both feel and read in the newspapers.” Said Jason Williams.