Well, recently Rachel Lucas wrote two opinion pieces in response to a very intense domestic violence commercial funded by former New York City Mayor Michael Bloomberg – that he made to promote further restrictions on gun rights. Rachel wrote one op-ed for Oregon Catalyst on how guns make women safer and then she wrote a more personal op-ed for the Salem Statesman Journal on how protecting herself with a gun is not academic.

An anti-gun commenter who was opposed to women defending themselves with guns against rapists posted this comment on the Statesman Journal: 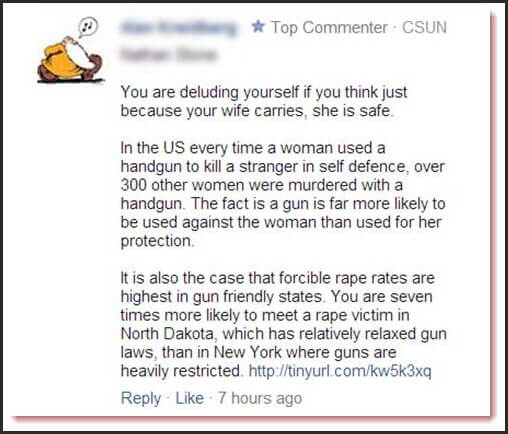 If you go to the link in his comment – http://tinyurl.com/kw5k3xq – all  the anti-gun UK author (Alice Arnold) really said was “I’m afraid of guns.” Fair enough, Alice Arnold would know if she’s afraid of guns.

But Alice Arnold gave no source for her statement “In the US every time a woman used a handgun to kill a stranger in self defence, over 300 other women were murdered with a handgun. The fact is a gun is far more likely to be used against the woman than used for her protection,” and more importantly, she’s comparing two things that don’t have a logical connection.

In fact, let’s look a little closer at this UK author’s “every time a woman used a handgun to kill a stranger in self defence”:

Alice Arnold would find she’s at odds a 2013 study funded by the CDC and the National Academy of Sciences that found consistently lower injury rates among armed crime victims compared with victims who used other self-protective strategies.

And guns are used defensively far more than they are used to commit crimes. The CDC study reports that in 2008, there were around 300,000 crimes involving firearms, versus anywhere between 500,000 – 3 million defensive uses of firearms in the United States. And as previously noted, 75 to 95% of the time a gun is used defensively, no shots are even fired.

It would be far more beneficial to the public discourse if anti-gun authors like Alice Arnold and anti-gun groups like Michael Bloomberg’s “Everytown For Gun Safety” would move away from the emotionally charged theatrics and deceptive “statistics” and enter into an honest and logical discussion.

Original sources for all the numbers cited in this article are available in this Oregon Catalyst article. (NOTE: There was no source given by the Statesman Journal commenter regarding his claim that you are 7 times more likely to meet a rape victim in ND than NY. His http://tinyurl.com/kw5k3xq link is to Alice Arnold’s article.)