I keep running into the corporate personhood bumper sticker. You know these people. They get enraged at the idea of a corporation as a person.

On February 11, 2015, the Oregon House voted on a bill to clarify what the meaning of a corporation is. The bill, carried by Representative Mitch Greenlick (D-Portland) substituted in a portion of the statutes the phrase “a party that is not a natural person” for the word “corporation” (36:24 in this video). 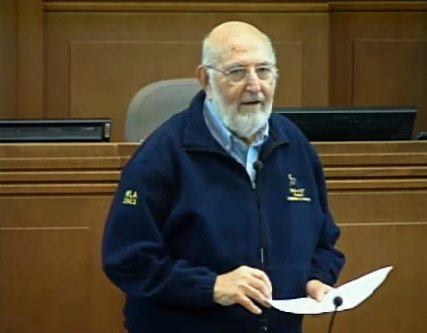 Later in the session, Representative Jim Weidner (R-McMinnville) counters with a great speech starting at 46:34 in the same video.

Not to be outdone, Representative Jeff Barker (D-Aloha) stands and remarks at 47:52, “When a corporation has stolen and done wrong – when a corporation goes to jail, I’ll believe it is a person.” HB 2328 passed 52-5 and is on its way to the Senate.

This concept of corporate personhood, of course, goes back to an 1819 US Supreme Court ruling, Dartmouth College v. Woodward, which recognized that corporations may exercise some of the same rights as a natural person. The current round of bitterness was inflamed in 2010 when the US Supreme Court declared in Citizens United v. FEC that corporations may exercise speech rights.

Some, unhappy with that ruling, have tried to make an issue out of corporate personhood. These people need to be careful what they wish for. In many ways, they want corporations to be treated as if they are persons. They want to file suit against them and serve them with papers, for instance. On the other hand, no one would think of letting a corporation adopt children or get married. In the end, a corporation is merely a collection of persons, and it makes sense, in many cases to treat them as if they are persons.

The very next week, Representative Barker, fresh off his stern rebuke of corporate personhood, carried a bill that effectively makes an estate a person, at 27:33 in the video. The idea of this bill is that if a person was owed restitution as a victim of crime, upon their death, their estate – kind of like a corporate victim, if you know what I mean – would be owed that restitution. HB 2226 passed and it too is on its way to the Senate. Effectively, the estate is a person who can, and should, be paid restitution.

Makes perfect sense to me. I don’t know what their problem is.

Mike Nearman (R-Independence) was proudly one of the “no” votes on HB 2328. He can be reached at [email protected]