Representative John Davis Thursday joined other House Republicans in asking their colleagues to reconsider the proposed $7.235 billion K-12 budget for the 2015-2017 biennium, drawing attention to the 7% proportional decrease in education spending compared to the 2003-2005 budget as a share of the General Fund/Lottery Fund state budget.

During today’s House Floor session, Assistant House Republican Leader John Davis (R-Wilsonville) used this floor letter with information from the Legislative Fiscal Office to highlight what appears to be a decreasing commitment to education over the past decade. 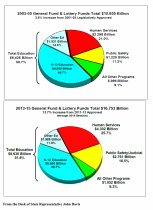 In response to the reality of an additional $1.8 billion in Revenue, Budget Co-Chair Rep. Peter Buckley called for even more taxes, encouraging the House to “boldly raise revenue.” Rep. Davis pointed to the meager 0.3% increase in education spending as part of the overall budget despite nearly $1.8 billion in additional revenue.

Throughout the week, House Republicans have been advocating for a stronger commitment to education spending and will continue to push for a budget that adequately funds schools and provides a quality education for Oregon students.