The Oregon State Police has amended their policy on the retention of backups of firearm background check data. Backups of data for approved transactions are no longer kept for 90 days – they are now kept for 10 days. This policy change went into effect sometime between March 2014 and September 2015.

This policy change for backup data was not communicated with the public, and as has been demonstrated, could be changed again at any time. The same is true of the current OSP policy of only keeping approved firearm background check transactions for 10 days – by law they can keep them for 5 years – it is just a policy that the Superintendent of the Oregon State Police can change at any time.

Remember, too, that firearm background check information is also kept by the gun dealer (and in some cases by the ATF) and at the FBI (NICS).

February 6, 2014 – During testimony on the anti-gun bill SB 1551 (“universal background checks”), the director of the OSP Identification Services Section testified that they keep the information on approved firearm background check transactions for 10 days – and that after 10 days the information is “purged.” She validated that after a clarification question from Sen. Floyd Prozanski (D-Eugene). Later in the hearing, Kevin Starrett, Director of the Oregon Firearms Federation, questioned whether approved sales were in fact destroyed after 10 days. Sen. Prozanski became very unprofessional and personally attacked Starrett saying “I understand your conspiracist perspective.” Sen. Prozanski’s unprofessional comment was reported in national news.

March 11, 2014 – After conducting further inquiries with the OSP, I learned that Kevin Starrett had been right: “When [the director of the OSP Identification Services Section] testified, she was only thinking of one type of record at the Oregon State Police. She hadn’t considered backups of information. In follow up information requests, I learned that the backups are kept for 90 days.”

Sometime between March 2014 and September 2015 – OSP quietly changed their backup retention policy – backups of data for approved transactions are now only kept for 10 days – the policy now aligns with their SB 1551 testimony.

May 11, 2015 – “Universal background checks” came back in the 2015 Regular Session of the 78th Oregon Legislative Assembly as anti-gun bill SB 941, which passed and was signed by the governor.

August 11, 2015 – In the days leading up to SB 941 going into effect, Kevin Starrett, Director of the Oregon Firearms Federation, contacted the Oregon State Police with questions about the implementation of SB 941. LT. Bill Fugate, OSP Public Information Officer, responded in an email on August 11th and his response appeared to reveal a change in the OSP policy on the retention of backups of firearm background check data.

August 16, 2015 – I contacted an OSP legal compliance specialist to find out if the OSP backup policy for firearm background check data for approved transactions had changed from 90 days to 10 days since March 2014.

September 16, 2015 – The OSP responded with a letter that gave information on their retention policy for firearm background check data, including backups. It included this phrase “Operational data backup schedules have been aligned with this retention schedule.”

September 17, 2015 – I wrote a follow-up request to the OSP, mainly to find out WHEN their backup retention for firearm background check data for approved transactions changed from 90 days to 10 days. 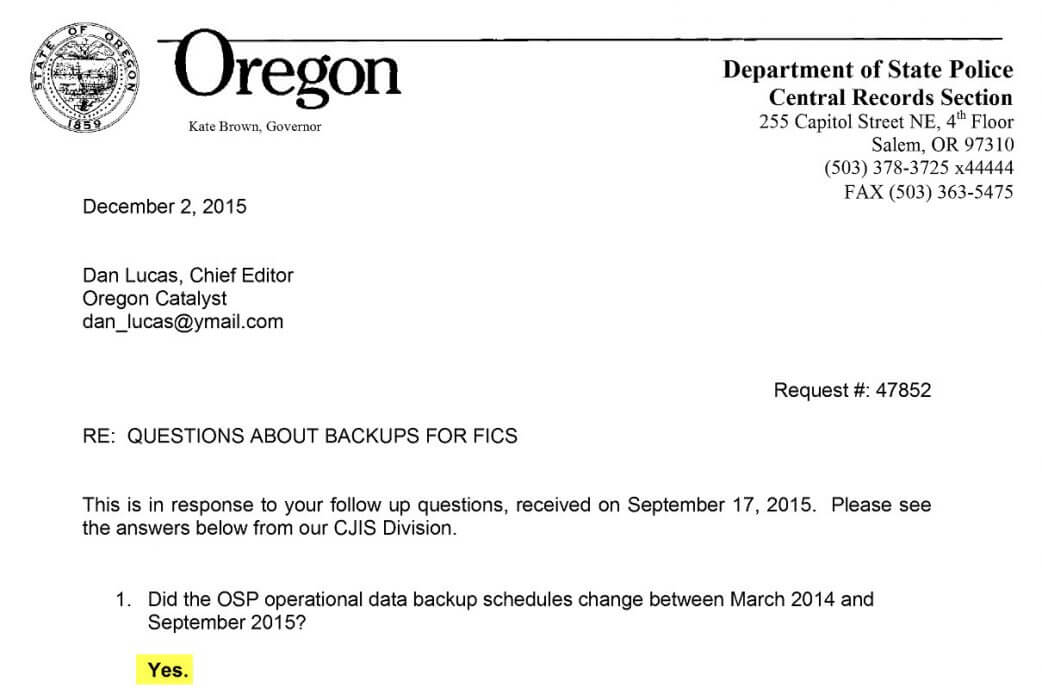