The top GOP winners in New Hampshire were not the top spenders. In fact, none of the top 3 spenders made the top 3 winners. 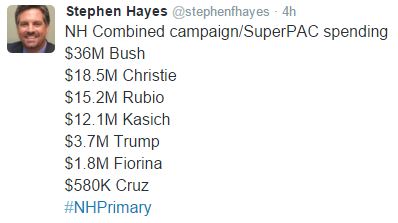 UPDATE (2/10/2016): The Daily Caller is reporting that as a result of Democratic “superdelegates,” Bernie Sanders “will likely receive fewer delegates” than Hillary Clinton from New Hampshire. How’s that for a stacked deck! That’s probably not going to sit well with Sanders, who is big on “fair.”

Unlike the Iowa Caucuses, independent voters could vote in the New Hampshire primary. It will be back to just Republican voters in the South Carolina GOP primary.

The next state in the 2016 presidential GOP primary/caucus schedule is South Carolina on Feb 20th and then Nevada on Feb 23rd. The Real Clear Politics (RCP) polling average for South Carolina has Trump significantly ahead, followed by Cruz, Rubio, Bush and Carson.

Click here for our report on the Iowa Caucuses results