Oregon now has the highest minimum wage in the country

Speaking to the specifics of the three-tiered minimum wage, KOIN reported “The incremental increases will eventually bring the minimum wage to $14.75 an hour inside the Portland city limits by the year 2022. On the coast, Willamette Valley and Cascade foothills, the minimum wage will top out at $13.50 an hour. In remote areas, eastern Oregon and 3 rural counties in southern Oregon, the hourly wage will be raised to $12.50.”

Gov. Brown claimed “a major win for Democrats and promising to uplift the working poor.”

Apparently not all small businesses agree with Avakian.

The Big Town Hero sandwich shop in Keizer will close on March 25th. Rep. Bill Post (R-Keizer) noted that “There will be at least 13 people affected by this in losing jobs.” 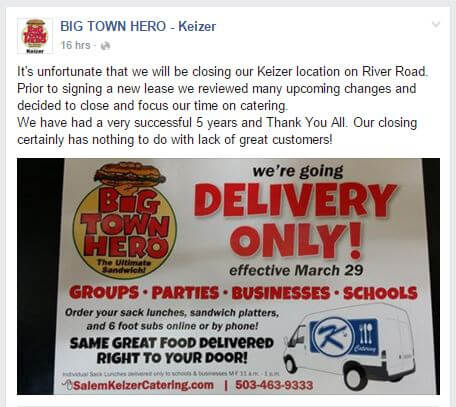 The owner told the Keizertimes newspaper “increases to minimum wage compensation and employee sick leave will have a significant impact on our bottom line. We feel like it will compromise our ability to provide the same level of service and quality products at the retail location.” 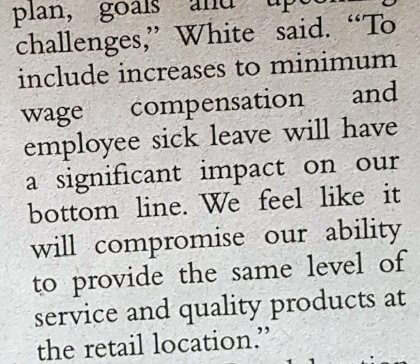 For those 13 employees, their new minimum wage will be $0 an hour and they will get 0 weeks of paid sick leave from this employer.

The owner and his family will now focus on their catering business, operated from their home.

The owner of Keizer’s Big Town Hero, Scott White, won Merchant of the Year in January at the Keizer Chamber of Commerce First Citizens Award banquet. At the award ceremony, White and his family were praised for their community service: “they’re always out there doing things in our community,” noting as an example “Scott came up with an Outstanding Card, which teachers can give to students doing good work at school to earn a free sandwich [at Big Town Hero].”

Business lesson from Eugene co-owner of a small business

Russell Schmitt wrote a piece yesterday for the Eugene Register-Guard on the minimum wage hike. Schmitt describes himself as “a lifelong resident of Lane County and co-owner of a small business in Eugene,” who is “not a Republican.” He writes that he’s “not a ‘greedy CEO,’ just a consumer who happens to own a small business and is perhaps seeing this issue through a different set of eyes than most people.”

Schmitt explains that his small business already pays above current minimum wage, provides health, dental, and vision insurance – and they were paying for vacation/sick leave before they had to.

Even with those excellent benefits, Schmitt’s business has had difficulty finding quality workers. He writes that “way too many” job applicants “are not worth it.”

“At least two people have been hired, only to never show up for the first day of work.” Only 1 in 4 applicants even show up for the interview. Too many applicants don’t even have a valid Oregon driver’s license. 2 or 3 employees showed up for several days, then just vanished.

Given the difficulty finding quality workers, Schmitt worries about other businesses: “I am offering more than the state minimum wage now, how is someone who is paying minimum wage going to fare?” He then asks if employers will “see an increase in productivity on par with the extra payroll? In a very basic sense, how can an employer not raise prices to compensate?”

Schmitt brings up how this won’t just effect how much is paid to the lowest level employees: “what about the domino effect that could possibly develop within each company? Is it fair to give $1,000 raises to only a few? What about the worker already making $12 an hour? Do they get some of this action?”

He also points out it’s not just an increased wage hike for employers:  “payroll taxes also will go up — this is not optional. This is on top of the sick leave pay the employer is on the hook for.”

Where will all this extra money come from?

Businesses that plan to continue are going to have to either raise their prices or reduce their workforce and hope that they can somehow get increased productivity from the remaining workers.

For business that do have to increase their prices, depending on their products, they will be competing with businesses in other states and other countries who have lower worker costs.