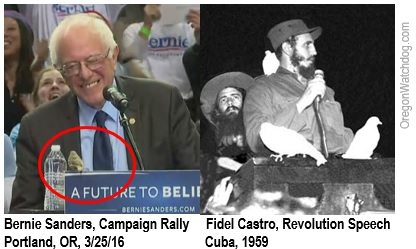 By Taxpayer Association of Oregon
OregonWatchdog

Sometimes politics can be funny and strange.  When I saw the humorous moment on the news where a bird landed on Bernie Sander’s podium during a campaign speech in Portland Oregon, my first thought immediately went a similar famous incident that occurred in Cuba where  doves landed on Fidel Castro as he delivered momentous speech at the beginning of the Cuban Revolution.

It also happens to occur on the week of the historic visit of President Obama being the first President to visit Cuba in over 75 years.  Hmmmm.

Although Bernie Sanders is no military dictator, both gentlemen do love socialism….and apparently birds.

— Fidel repeated this incident during the 30th anniversary of the Cuban revolution.  (Notes 1, 2)