– Why it’s good, how they bungled it, banning $100 bills? Candidates complaints, more…

Deciding to place Harriet Tubman on the $20 bill is a solid choice for a worthy heroic woman of history. So worthy that she deserved better than the bungling that led to the decision.

Deciding in advance that the replacement was only reserved for a woman only makes it seem like she didn’t win on merits alone – that would have been a better accomplishment for Tubman who deserves to win on merits alone! Furthermore, why does the Treasure Secretary get to be the only person who gets to decide? He’s already lined up scores of changes to our currency with little public input. If you want America to be involved why not invite our elected lawmakers as opposed to press announcements that most of America had no idea was occurring.

Obama’s previous Treasury Secretary is currently advocating at taking out of circulation our $100 and $50 bills as better way to fight terrorism and black market groups. It seems like our currency is becoming the new political battleground and I hope that Obama moves away from his acting alone strategy and embraces more America in his decisions.

Back to Tubman. I deeply appreciate Harriet Tubman because I went to Harriet Tubman Middle School in Portland. As a Caucasian in the school I was in the minority, but very blessed to be able to live in a new inner-city world most people never see and I didn’t know existed. Tubman was our school’s hero. Her life had real power and meaning and application to our lives. Unfortunately, after I graduated, I rarely ever heard of Tubman mentioned ever again. So I know that promoting Harriet Tubman on our currency will help have a meaningful difference for many Americans that we may not readily see.   This is why I cringe when I hear politicians complain (Ben Carson who says she should be on the $2 bill).   I believe this is a solid choice.

Postscript: When it comes to historical women I admire, I really like to remind people of Clara Barton. The same Clara Barton whom Governor Scott Walker said should be on the bill during the Presidential debates. Clara was more than the founder of the Red Cross American chapter. She helped victims of both the North and South during the Civil War and represents someone who helps brings divided people together – which America needs right now! Barton helped prisoners of war, helped proper burials and body identifications of the dead for their families, was an abolitionist, an early woman suffragist, helped communities with disaster relief, and even gained international attention for helping the wounded in the Franco-Prussian war. This year I was honored to leave a gift for her at her memorial in Antitiem Maryland. 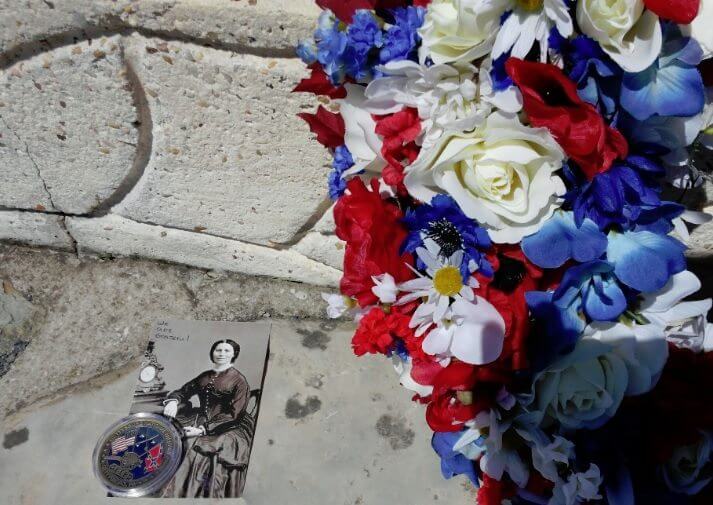