1. It is a hidden sales tax
Measure 97 is a gross receipts tax. It increases the business minimum tax to $30,000 plus 2.5% of gross sales on larger businesses where sales (not profits) exceed $25 million. Unlike a retail sales tax that consumers see when they make a purchase, Measure 97 would be like a hidden sales tax.  A former state economist said it is like “a sales tax on steroids”

2. Oregon consumers bear the burden for Measure 97
Oregon estimates that more than two-thirds of the tax would be passed on to Oregon consumers in higher prices for everyday essentials like utilities, groceries, prescriptions, phones, insurance and medical care.

4. A billion in 2009, now $3 billion?
In 2009, Oregon lawmakers raised a billion dollars in new taxes on income, business, gas and hospitals. Despite billions in new permanent revenue they’re back with M97 which is three times the size.

5. It’ll cost you $613 in higher costs
Measure 97 will escalate the cost of consumer goods. It would cost Oregon households between $372 and $1,282 dollars per year ($613 average) as a result of higher prices and other impacts from this tax on sales.

6. Hurts the poor the most
This tax hurts lower income and fixed income families more because they spend a greater share of their income on groceries, clothing & utilities which would increase under Measure 97.

7. We would lose 38,200 jobs, yet it adds 17,000 government jobs
Oregon would lose 38,200 private sector jobs because the $3 billion tax will depress wage growth, increase layoffs and result in fewer jobs created.  One study estimates that Measure 97 will help fund 30,000 new government jobs over the next 10 years. State jobs are almost twice the cost of private sector jobs which create a large lifelong bill for Oregonians to pay.

9. Utility bills up 5%
Utility companies across Oregon estimate increases between 3 and 5%, burdening low income families the most, and increasing operating costs to small business.

10. It’s a tax on sales – not profits
Companies with small profit, large profit or no profit at all would be forced to pay this huge new tax.

Hidden taxes are secret key to unlimited taxation
Europe introduced their first hidden sales tax in 1973 at a rate of 10%. Today, the tax is a staggering 21% on average! By removing the sales tax from public view (no longer on store receipts) it allowed politicians to double the people’s taxes over time without the public ever seeing it. As grocery prices soared people blamed local businesses when it was in fact the hidden tax.

Tax on a tax on tax
M97 is a “tax on a tax” compounded at each step in the supply chain. It’s possible for an item at retail to have been taxed at 5%, 7.5% or even 10%.  Below is an example on how this type of tax works elsewhere. 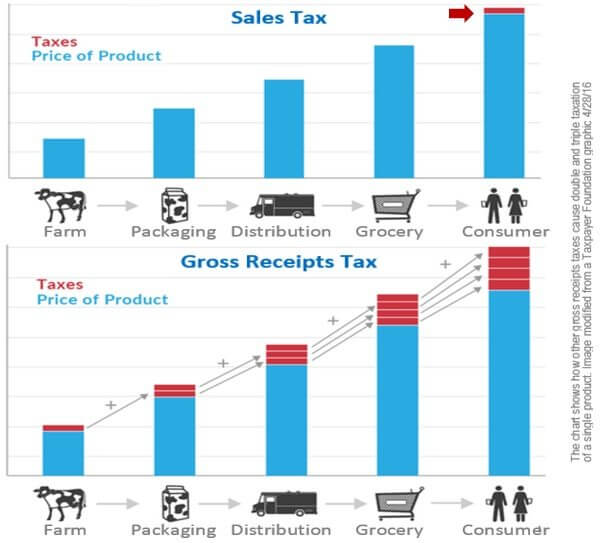 Read more about Measure 97 at Defeat97.com