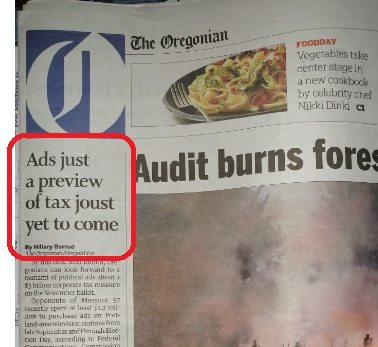 Taxpayer Association of Oregon was mentioned in a front-page Oregonian article today over a postcard campaign highlighting outrageous government waste.

“The Taxpayer Association of Oregon, a couple of weeks ago, sent a postcard to 30,000 Oregonians that claims “Oregon is the #1 tax-and-spend state in the West,” based on per-capita state spending figures from the National Association of State Budget Officers. The mailer cites some of the state’s more expensive bungled projects, from $300 million spent on the failed Cover Oregon healthcare exchange to a 10-year, $36.5 million-per-mile highway project between Eugene and Newport.”

Here is the full article article “Quiet start to ad blitz over $3 billion tax measure?” which contrasts this ad campaign to the teacher television ad campaign hitting airwaves and also about the upcoming Measure 97 tax on the ballot.