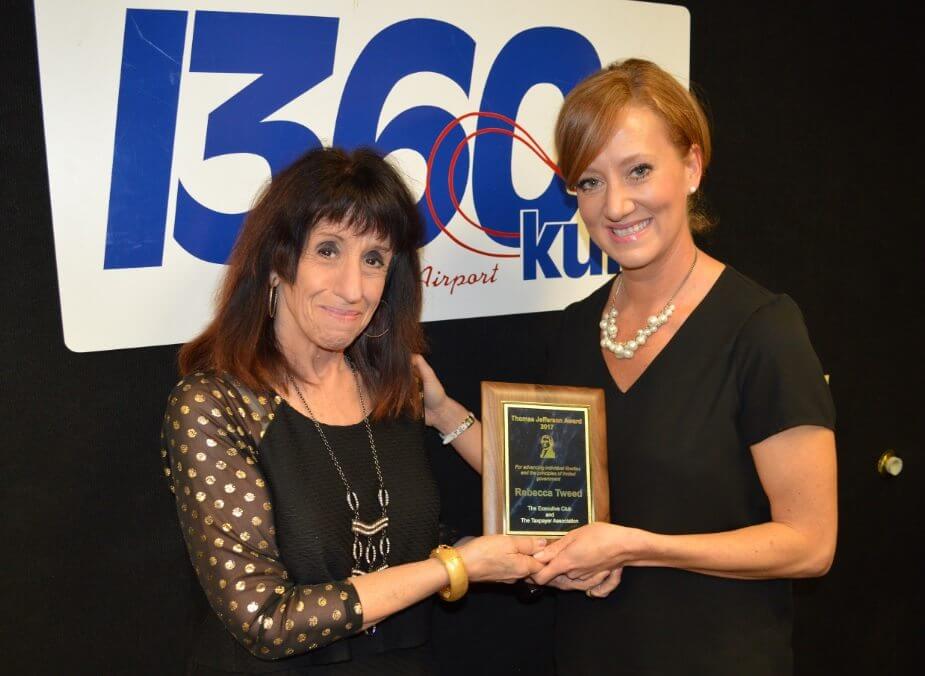 The 17th annual Thomas Jefferson Award was awarded to Rebecca Tweed on the Jayne Carroll Radio Program KUIK 1360.   Rebecca Tweed was recognized for her vital role in helping bring together one of the largest coalition’s in Oregon history to defeat Oregon’s largest tax increase threat known as Measure 97.    It is not an overstatement to say that because of Rebecca Tweed and the defeat of Measure 97 and it’s $3 billion tax increase that there are numerous  small businesses that have been spared from closing and numerous everyday Oregonians spared from layoffs.

Rebecca Tweed has a solid history of making Oregon better.  In 2010, Rebecca helped elect taxpayer friendly Oregon House candidates which directly altered the impact of the 2011 Legislature.    Rebecca also has invested in Oregon’s youth by serving as president of Emerging Leaders of Oregon.   It is just one of many ways that Rebecca Tweed gives back to help improve the lives of Oregonians.    Rebecca won the 40 under 40 Award by the American Association of Political Consultants.  Rebecca Tweed now currently continues to protect Oregonians from over-taxation with her leadership in a new group called Brighter Oregon. — The Thomas Jefferson Award is a 17 year Oregon tradition of the Taxpayer Association of Oregon (since 1999) and the Oregon Executive Club (since 1975).    The distinguished Thomas Jefferson Award is given for Oregonians who advance the principles of individual liberties and limited government.  Previous winners have been Dennis Richardson, Lars Larson, Steve Buckstien, Dorothy English, Senator Kim Thatcher, Don McIntire and many more.