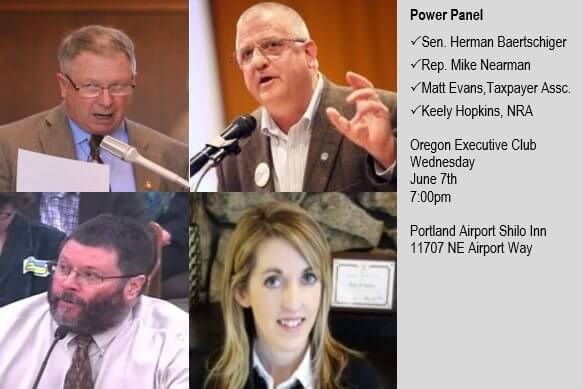 The Legislature is looking at $11 billion in new taxes during the final days of the 2017 Legislature. These taxes include gas taxes, a sales tax on cars, a new payroll tax, property tax increases, stealing the people’s Kicker tax Refund and a billion dollar ‘Son of 97’ business sales tax. The Legislature is also looking at new infringements on civil liberties, our privacy and the Second Amendment.

To get the inside story on what is happening right now in the Legislature we have invited State Senator Herman Baertschiger, State Representative Mike Nearman, NRA lobbyist Keely Hopkins and Taxpayer Association lobbyist Matt Evans in a powerful panel.

State Senator Herman Baertschiger Jr will be giving an update of the bills an debates occurring in the Oregon Senate. Sen. Baertschiger is a long standing champion of taxpayers and small business. He himself started his own business at age 19. State Representative Mike Nearman will be giving an update from the Oregon House. Nearman served as the Chair of the Polk County Republican party and is a member of the Board of Directors of Oregonians for Immigration Reform

Matt Evans is a lobbyist for the Taxpayer Association of Oregon and founder of Wagontire Consulting. Matt will be providing an update of the latest tax increase bills in the Legislature.

Keely Hopkins is the lobbyist with the NRA and will be providing an update on Second Amendment legislation in the 2017 Legislature.