A straw poll of over 300 taxpayer activists were asked whether they support or oppose legalizing online poker. The results show they would oppose legalization by overwhelming numbers.

Senate Majority Leader, Harry Reid, initially included a bill that would legalize online poker into President Obama’s tax cuts package. He pulled the proposal so it was no longer included in the bill that was passed, however, he has affirmed his commitment to legalizing online poker.(Politico 12/10/10) 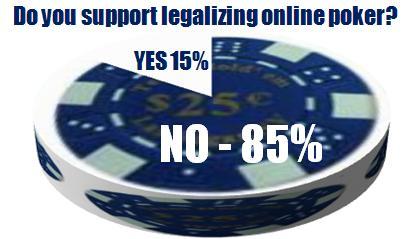 Democrats argue for the positive tax implications of the legalization. The Christian right look at the social implications.

The Joint Committee on Taxation scored an online gambling bill sponsored by Rep. Jim McDermott, D-Wash., as generating $42 billion for the federal government over 10 years, and $30 billion for state and local governments.

Chad Hills, a spokesman for Focus on the Family, roughly estimates online gambling would create $25 billion annually in social costs including bankruptcy, crime, and other negative impacts of gambling addiction.