Oregon is burning. Standing between you and the heat are many highly dedicated people fighting these fires, among them are an elite group from the Oregon Department of Forestry (ODF) called Forest Inmate Crew Coordinators (FICCs).

When I say elite, that’s not because these men commonly get the recognition they deserve. It’s because real data supports the use of that word. Last year, I was hired to do a cost/benefit analysis of the use of prison inmate labor at the South Fork Forest Camp. ODF records data from its assessment of the contracted crews it has hired to fight wildland fires.

We applied the same methodology to South Fork crews for a comparison. When it comes to fighting forest fires in the State of Oregon, South Fork is second to none.

Even better, South Fork Crews cost our state less than half of what private contractors do on a per person basis. That’s of course because the crews are made up of inmates, whose marginal labor costs are very low.

Trying to get a positive value out of inmate work crews is harder than one might think, however. The labor costs are low, but the relative difference in productivity can also result in inmate crews costing more than contracting the work out to private companies.

In 2013, Portland State University’s Center for Public Service released a study of Oregon’s flagship inmate work program, Oregon Correction Enterprises. Their final report detailed what a struggle it is to get a positive rate of return from prison labor.

My research discovered ODF clearly excels in getting a measurable value out of inmate labor. Something special is going on at South Fork, and it’s robustly evident in the data.

The method we used compared South Fork crews’ cost per inmate manday against the alternative cost of using private contractors to do the same work. South Fork does a lot more than fight fires. They do forest management work, maintain recreational facilities, and maintain roads running through state forest land.

When all added together, this little prison in the middle of the Tillamook State Forest saves Oregon a lot of money for an institution of its size. The replacement cost of South Fork is positive, meaning that to get the same amount of work done without South Fork, ODF would have had to spend the amount indicated in the graph below. 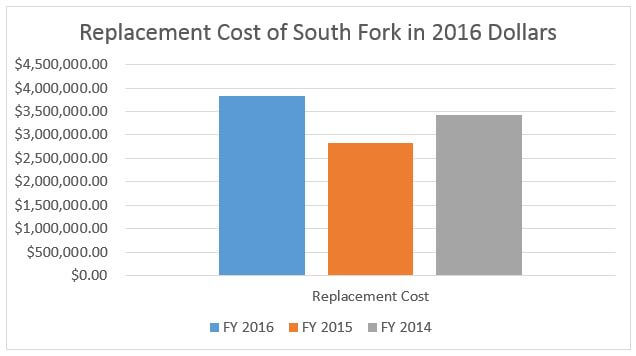 These are of course aggregate numbers. Some projects South Fork works on have negative replacement costs. Others like fire protection and building recreation trail bridges are both positive and extremely high. The most important part of my research will ultimately be in how ODF uses these analytic tools to further maximize Oregon’s rate of return on this unique public asset.

This is an institution that deserves some recognition. As smoke rises from many parts of the Beaver State this heavy fire season, South Fork’s crews are out there right now saving our natural resources and saving us money.