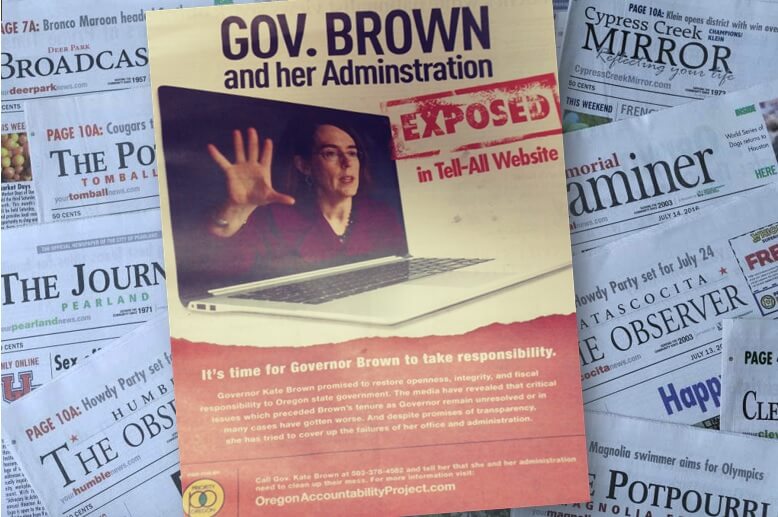 Priority Oregon just placed a full-page ad in The Oregonian exposing the long tortured record of Oregon Governor Kate Brown. The ad highlights a new website, Oregon Accountability Project.com. At the site you can see a long list of scandals, embarrassing blunders and painful government missteps.

Here are some examples featured (1) Oregon gives Medicaid to 55,000 ineligible people, (2) Gov. Brown’s Administration pays $7 million after preschoolers starved by foster parents and (3) Gov. Brown Rewards Agency Staff for Crafting Smear Campaign. That third example means a lot to me as my friend lost her job, along with hundreds of others, because of government abuse of an innocent health care provider which needlessly forced it into bankruptcy.  Instead of getting to the bottom of the scandal, Gov. Brown rewarded those involved. These were real Oregon families who lost their jobs because of this governmental abuse.

The Oregon Accountability Project also has videos which detail the problems of Governor Kate Brown’s foster care scandal, elder abuse cover-up and day-care oversight failures. Many of these Gov. Kate Brown examples are detailed within the site with newspaper citations which have tracking her failed governorship for many years and a sign of more to come if things do not change.