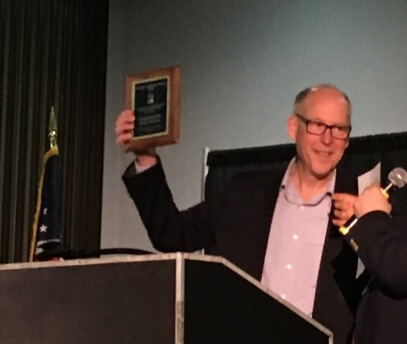 Oregon US Representative Greg Walden is the Taxpayer Association of Oregon’s 18th annual “Thomas Jefferson Award” winner – one of the highest and longest running political awards in Oregon. It was awarded before a crowd of 1,000 people gathered at the annual Oregon Liberty Alliance event in Portland.

His work on, and vote in favor of, the recently enacted and historic Tax Cuts and Jobs Act earned him the recognition. The bill was the first major reform of federal taxes in more than 30 years and sought to update the tax code to respond to a changing world.

Walden was a consistent champion of last year’s tax cut bill, and his efforts are already paying off for middle class taxpayers. Almost immediately upon passage in December – and as intended by President Trump and Representative Walden – large and small companies across America began to announce wage increases and bonus payments for middle class workers.

– Over 320 companies in America have already handed out bonuses to their employees as a result of this tax. Over 2.5 million workers have already received various bonuses because of the tax.

In addition, corporations have revealed plans to increase their charitable contributions, investments in plant and equipment, and worker training and retirement plans. Employers have already announced about $1 trillion in investments in the US economy. This is on top of the expected $1,000-$3,000 in tax savings many families will be seeing in their paycheck from reduced tax rates.

As importantly, middle class workers will begin to see additional take-home pay increases beginning in February. Because low- and middle-income workers will receive a reduction in their federal taxes, employers are able to withhold less tax each pay period.

Walden’s work on the tax bill also will lead to time saved for many middle income taxpayers. Because the bill dramatically increases the standard deduction – for a couple filing jointly to $24,000 per year – many taxpayers will find their preparation of tax returns much simpler. No longer will they need to track “itemized deductions” such as medical expenses or clothing donations to Goodwill except in years when these expenses might be extraordinary. It also saves both time and cost

Across the spectrum of Oregon’s economy, from Portland to Pendleton, Burns to Bend, large businesses and small, rural and urban, Representative Walden’s work on the Tax Cuts and Jobs Act will lift salaries and benefits, and increase the rate of hiring and business formation. This accomplishment adds to his career in Salem and Washington fighting for Oregon’s middle class.