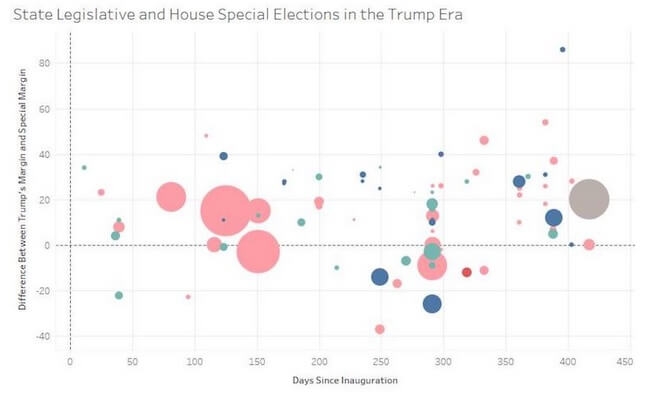 The conservative Weekly Standard magazine issue this chart below about voter turn-out margins in races since the Presidential election.  It shows a change of partisan victories over time which is becoming bad news for Republicans and a sign that Congress better begin passing more accomplishments before the end of the year or else.   The Weekly Standard explains the chart:

“Each point represents a special election, and the size of the point is proportional to the number of votes cast for major party candidates. The vertical position of each point represents how the margin compared to Trump’s 2016 margin (points above the dotted line represent Democratic over-performances and points below it are Republican over-performances). The graph reads left to right chronologically. And the color represents the result—pink means Republicans held the seat, dark blue indicates a Democrats flipped it, dark red means Republican flip and light blue means Democratic hold.

The large point at the far right hand side of the graphic is PA-18. It’s far above the dotted line (zero), indicating a huge Democratic overperformance. It’s also one of the larger points on the graphic—meaning that more people voted on Tuesday than in the vast majority of special elections in the last 14 months.

In most special elections during the Trump era, Republicans have underperformed the Trump’s 2016 margin. Saccone is no exception—the election was essentially tied in a district that Trump won in a blowout. That’s worse than the average Republican underperformance (Daily Kos Elections had Republicans on average underperforming Trump’s margin by 13 points as of Tuesday night), which is bad. But when you put it in context, it’s actually not that far off some other races we’ve seen during the Trump Era. (Remember Kansas’s 4th District, where the Republican won a special election by seven points after Trump won it by 27 points in 2016.)

Trump partisans might want to write off these results as a fluke (Saccone was a bad candidate; special elections have weird turnout; Democrats have poured a lot of money into these races). But the numbers are a part of a broader pattern. President Trump is historically unpopular, and his bad poll numbers are hurting Republicans up and down the ballot. In recent elections, rank and file Republicans have failed to turn out and, in some cases, moved towards the Democratic party. In generic ballot polls (one of the best predictors we have of the eventual midterm result), Democrats lead Republicans by a solid margin. And Republican members of Congress have been retiring at a breakneck pace.

Every single indicator suggests that agree that Trump’s unpopularity has hurt Republican candidates—including Saccone—and will continue to do so through November.”