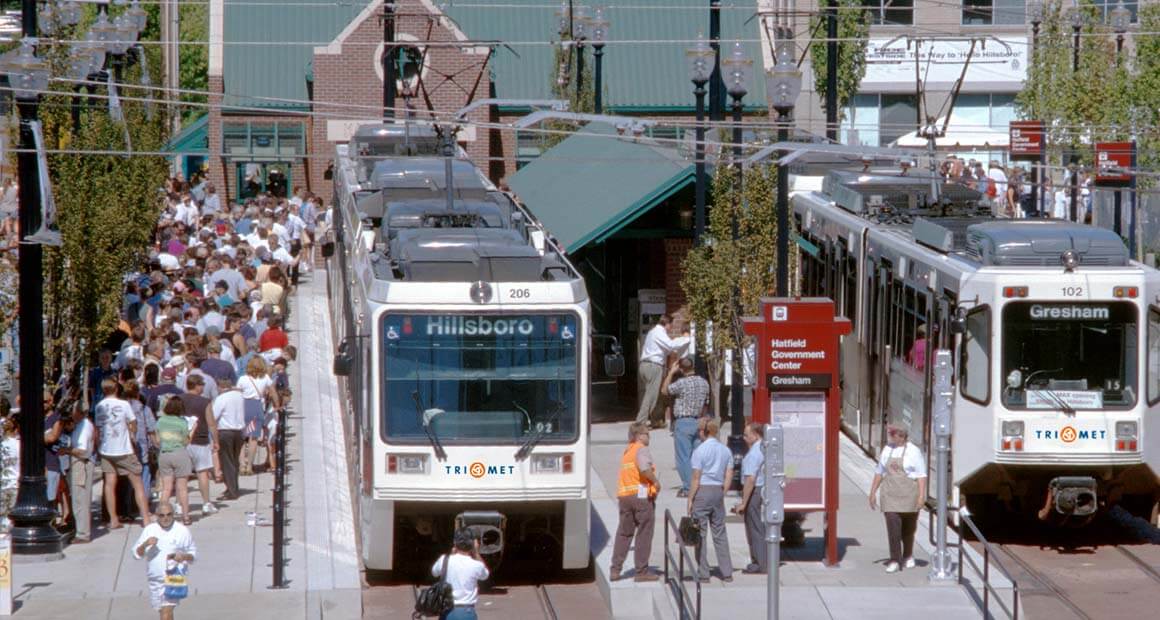 TriMet recently released its approved FY19 budget. For me, that means another annual observation of key data they publish at the end of the document. If one regresses all the variables plausibly thought to be correlated with passenger revenue for which data is available, it’s easy to come up with a model that explains 99% of TriMet’s variation in rider-paid cash. That’s a strong model, but it also will include several variables that are not statistically significant predictors of TriMet’s gross earnings from its ostensible customers.

A Breusch Godfrey Test reveals this time-series regression, like most, has too much serial correlation to run with Ordinary Least Squares (OLS). So I ran a Cochrane-Orcutt Model instead. Here are the results where the variables that are not statistically insignificant at the 95% confidence level have coefficients of zero:

It’s interesting then to see what has no measurable relationship with passenger revenue. Neither the population of the Portland area nor its employment level predicts TriMet’s ticket sales. That’s another way of measuring the fact that fewer and fewer people are riding public transportation in the Portland metro area.

Spending on fare inspection is statistically insignificant as well. This would seem to imply that what they are spending is not buying a sufficiently high inspection frequency to impact revenue in a measurable way.

When the superfluous variables are dropped, the serial correlation goes away and a stronger OLS model emerges:

There is enormous insight packed into that little equation. First, notice what’s positive. As we’d expect, increasing the amount of revenue per vehicle will increase passenger revenue, but it has little effect compared to raising prices. A dollar increase in the average fare paid by TriMet riders would raise almost $33 million. Notice how small the change in revenue is for a marginal increase in vehicle hours: only $13.94. It costs way more than that just to pay the driver’s wage for that additional hour.

Now look at what’s negative: the west-side MAX blue line. This is an indicator variable; so it’s very existence reduces passenger revenue. As you saw in the first model, a variable for each light rail line was included. Though they were all negative, these variables were not significant at the 95% confidence level. They clocked in at around 90%. Given the strength of this model, with an adjusted R-squared of .99, we thus have strong evidence that TriMet’s investments in light rail are not increasing its passenger revenue. In the case of the west-side, it’s very existence has cost TriMet, on average, over $4 million a year in lost revenue.

This likely comes from two effects. The first is, of course, fare evasion. Buses come with a built-in fare inspector, the driver. Light rail does not. So by replacing buses with light rail, in addition to the higher operating costs, TriMet is choosing a strategy that inherently puts downward pressure on fare compliance.

There might be another effect behind this negative coefficient. Light rail is also less reliable. A transportation system dependent on channelizing everyone onto two tracks that, should one little thing go wrong, or one little thing need scheduled maintenance, everyone has to randomly add 45 minutes to their commute. Would-be loyal, paying customers have likely been giving up on TriMet as soon as they can afford another option.

The data makes it rather clear. TriMet has made some strategic choices that now undermine its ability to grow passenger revenue.