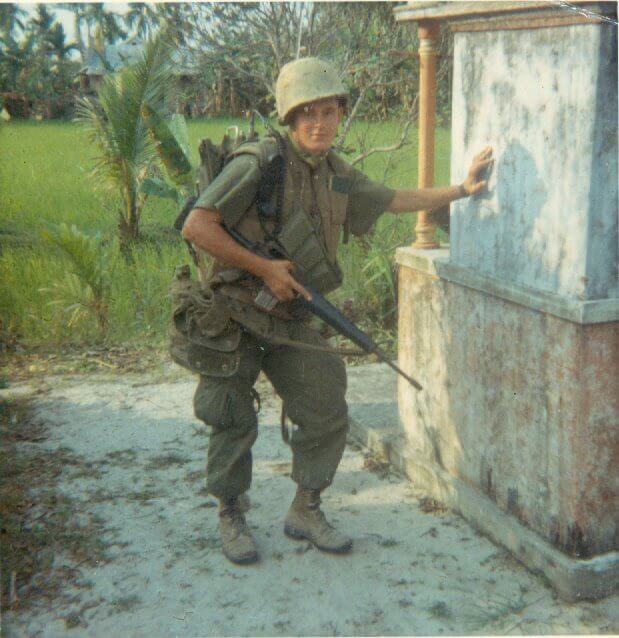 My father will be speaking at the Memorial Day ceremony this coming Monday at the Oregon Vietnam Veterans Memorial. Randy Shierman (pictured above) is a combat veteran of the Vietnam War. I’ve written about him here on the pages of the Oregon Catalyst. I’ve been able to get a copy of his notes. Here’s what he plans to say:

Fifty years ago today I was on leave, having just completed my tour in Vietnam. A few months before that I lost a friend at the opening of the Tet Offensive. We were both born and raised in Oregon. I was from Portland, and he was from Southerlin.

Monte Pitner was fearless. The kind of marine that volunteered for things. He was a machine gunner, but he was also handy with a shotgun. Monte Pitner would volunteer to go out on patrols with a shotgun, but what set him most apart from other marines was that he had the Doors’ debut album. When you’re still a teenager, it’s little things like that stand out.

From December 1967 through January 1968 our unit, Golf Company 2nd Battalion 3rd Marines had been attached to 1/7. The Seventh Marine Regiment’s tactical area of responsibility involved the task of patrolling the “Rocket Belt” around the huge naval air base in Da Nang. The NVA had been infiltrating across the Demilitarized Zone and the Laotian border with cheap but reliable 140mm rockets that weighed only 90 pounds, and this man-portable weapon could lob its 9-pound high explosive warhead ten kilometers. All the North Vietnamese needed to do was point the thing from a dirt mound at a 30 degree angle in the general direction of Da Nang from a roughly ten thousand meter distance to suppress the source of the marines’ air support, thus the emergence of the rocket belt which was an 8 to 12 kilometer half circle radius from Da Nang.

During the month of December 1967, one common patrolling mission was a platoon-sized envelopment of one of the many abandoned villages in the Rocket Belt. Marines would set up ambush positions at a safe distance outside the village and call in an airstrike on any potential enemy taking refuge there, hoping to then ambush NVA units that tried to escape the bombardment. These marines would then move into the village, looking for a body count, but these missions had been yielding few enemy casualties recently.

For most of the month of December 1967 these large patrols would have little contact with the enemy beyond sporadic sniper fire, booby traps, and written messages left behind. In January 1968 marine intelligence in I Corps was spot on, warning of large NVA units infiltrating from the western highlands toward the populated areas of the east coast for a major imminent attack that would come to be known as the Tet Offensive that would fully break out across South Vietnam on January 31, 1968.

This caught General William Westmoreland and his MACV (Military Assistance Command Vietnam) down in Saigon by surprise, but during the preceding month of January, marines in the north were proactively trying to counter it. To cover more ground, Golf Company’s patrols got smaller in size and more frequent in operational tempo, soon finding the enemy contact they were looking for.

On the night of January 29, 1968 Monte Pitner’s gun team was attached to Sgt Roy Bembry’s Second Squad from First Platoon as it was set up in an ambush position in a cemetery’s pagoda overlooking miles of open fields and rice paddies. After midnight they heard an extremely large column of NVA moving by.

I was the company’s forward air controller, but that night I was just on radio watch in Golf Company’s command post, and I received Sgt Bembry’s situation report. I woke up the company commander, 1stLt Peter Hesser, who ordered Bembry to call in an artillery strike, but due to the size of the enemy unit, Bembry was told not to open fire with the entire squad. Instead, after the fire mission, Hesser wanted them to take a single shot against the “tail-end Charlie,” the last enemy soldier in the column as the NVA regrouped and moved out (a common VC tactic used on us marines).

That shot was taken by Lcpl John “Hippie” Gerro using a M-14 with a bipod and starlight scope. Gerro dropped the enemy soldier with a single shot and the NVA column continued on, not knowing they had lost a man. Upon daylight Bembry’s squad was ordered to find that body and report back. What they found was no guerrilla; he was wearing a nice new uniform of a regular NVA soldier and was carrying several bags filled with new Chicom grenades.

The rest of First Platoon, under the new command of the relatively green 2ndLt James Jones, was sent out to link up with his Second Squad and patrol the area in search of that NVA unit. A blood trail was found leading toward the village of La Bong 3 near the shore of the Yen River. Jones had his platoon seal the village off, sending Bembry’s squad to cross the rice paddy two kilometers east of the village to enter a treeline and then sweep through that vegetation in a westerly direction toward the village with the squad online in assault formation.

Knowing he could be heading into trouble, Bembry had his squad cross the paddy cautiously with a great deal of dispersion between his marines while he stood by his radioman and already had the grid coordinates of several likely enemy positions written down for a quick reference to speed the request for supporting fire. Bembry was directly behind his first fire team as it penetrated the treeline. He was just entering the vegetation as a sudden downpour of bullets rained down upon them.

Entrenched in the concealment of that vegetation were several NVA companies in fortified positions reinforced with heavy machine guns. On this day before the outbreak of the Tet Offensive, Bembry’s rifle squad had just stumbled upon a large enemy unit that was poised to assault Da Nang. All four marines in that forward fire team were killed instantly.  Bembry hit the ground to return fire but his M-16 jammed.

As he began clearing the cartridge from his rifle’s chamber, a NVA machine gun round entered his cheek, went out his jaw, down his neck, and out his back. He laid there for a moment feeling no pain at first, assuming he would soon be dead. Instead he lived and resides in Texas today. That round was a tracer, and its hot phosphorous cauterized his wound, lessening the bleeding.

Once the shock wore off, Bembry said to himself, “I’m not dead yet!” as he cleared the stoppage, chambered a new round, and killed the NVA gunner who had shot him. Bembry then tried to crawl back to the rest of his squad that was pinned down in the rice paddy behind him, but having just returned fire, Bembry became a target once again. Rounds began impacting all around him until suddenly the fire eased off, giving the wounded squad leader a chance to make his way to the paddy dike’s berm where the rest of his squad was hunkered behind.

The fire eased off Bembry, because a machine gunner that was attached to his squad, Monte Pitner, at the age of 19, drew it away. This intrepid Oregonian handed his M-60 over to his assistant gunner, picked up a rifle, and charged into the tree line in an attempt to rescue Bembry. Pitner was cut down by multiple rounds, dying quickly after one round tore through his neck, the others through his upper chest. Yet by drawing fire away from his squad leader, Pitner sacrificed his life to save Bembry’s.

In the mid 1980s, I drove my family down the I-5 to Disneyland. As we reached Southernlin, Oregon I took Exit 136 into town, stopped at a gas station, went to a phone booth, looked in the phone book, and found his parents’ phone number. I just stood in that phone booth. I wanted to tell them the story of how their son died, but I couldn’t make the call. I got back in the driver’s seat of my van and continued on our trip.

What could I have told them, that they raised a great son? They knew that. Had he survived the war, Monte Pitner probably would have been my best friend as we made the most of life in the civilian world after the war, but no doubt his parents too had a depiction of what their son could have become.

Monte Pitner was a hero, but the only medal he earned from this last act of bravery as a U.S. Marine was the Purple Heart. His name is chiseled into stone here alongside the other Oregonians who gave their life for their country in 1968. There are many such heroes memorialized here, but all that’s left is a name. Few know their stories. Now you know Monte Pitner’s. 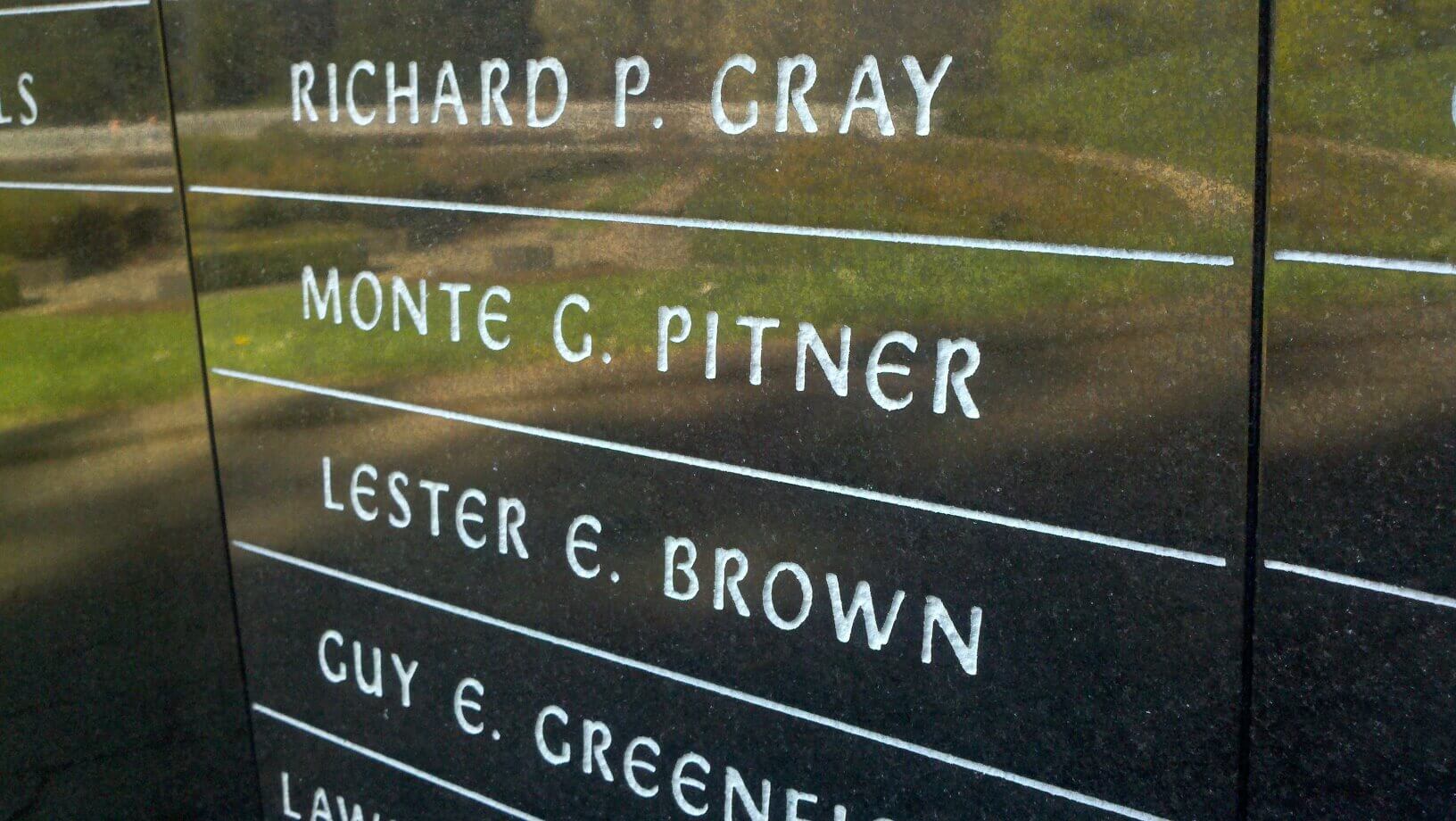 If you’re in Portland for Memorial Day why not stop by for the ceremony? It’s one of the Portland area’s great parks, and it’s filled with history.