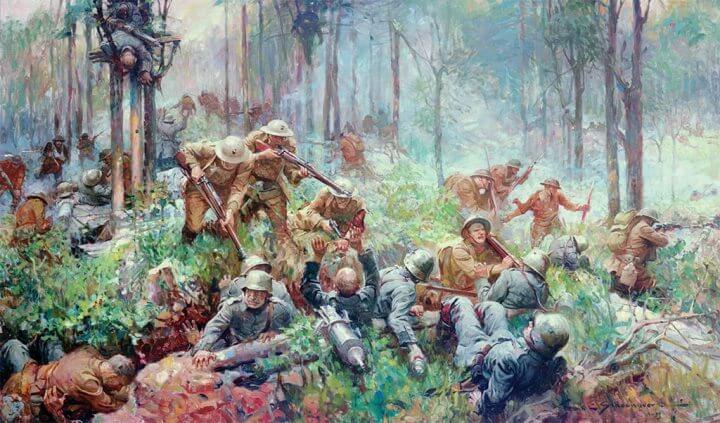 A century ago today, a remarkable battle began, a battle well known in Europe but largely forgotten in the United States, a decisive battle that marked the United States’ arrival as a global power of military dominance. During his official state visit two months ago, French President Macron made a subtle but powerful tribute to the United States’ long relationship with France. Weeks before his trip, Macron surprised American state dinner planners with a request to offer the gift of an oak tree, and if possible, to plant it on the White House grounds after dinner. That night it was revealed this sapling came from Belleau Woods.

It was there that the German Army made a major operational error. Thinking the weakest point of the French line was where the newly arrived Americans were positioned, on June 1, 1918, the German Army overwhelmed them, pushing the U.S. Army’s 2nd Infantry Division back. On its flank was an attached marine regiment, the 6th Marines. The French ordered a retreat and the 6th Marines were used to cover the allied withdrawal that was threatening to become a rout.

As the Germans approached the 6th Marine Regiment’s position, they did not get the usual grazing fire across no-man’s-land that could sometimes help guide the advance. Instead the marines waited until the Germans were within 100 yards and then opened up with a fusillade of well-aimed shots on an enfilade target, stopping the German advance.

As the surprised Germans regrouped for another assault, the French signaled for the marines to break contact. Marine Captain Lloyd W. Williams of the 2nd Battalion, 5th Marines replied “Retreat? Hell, we just got here.” The 5th Marine Regiment, which stood in reserve behind the 6th, instead swung around for a counter attack against the five German divisions in the woods in front of them, catching the enemy off-guard and slaughtering dense troop formations staged in an assembly area. Though the Germans were mostly veterans of several years of war, they were unaccustomed to such daring maneuvers and accurate small arms fire. The allies were able to exploit this moment and the Germans’ last hope for victory in the First World War died with the loss of this battle.

This was not the first time the Germans met the U.S. Marine Corps on the field of battle. After their first encounter at the April 20, 1918 Battle of Leffincourt, intercepted German messages would make reference to the marines’ distinct boy-scout-looking uniforms. The Germans didn’t know what kind of units these two regiments were; so they began calling them “Teufelshunde,” (devil dogs), due to their deadly accurate marksmanship and aggressive tactics. German intelligence warned operational planners not to choose the devil dogs’ location as the point at which to assault the allied lines. The German commanders at Belleau Woods apparently didn’t get the memo, and the rest is American military history.