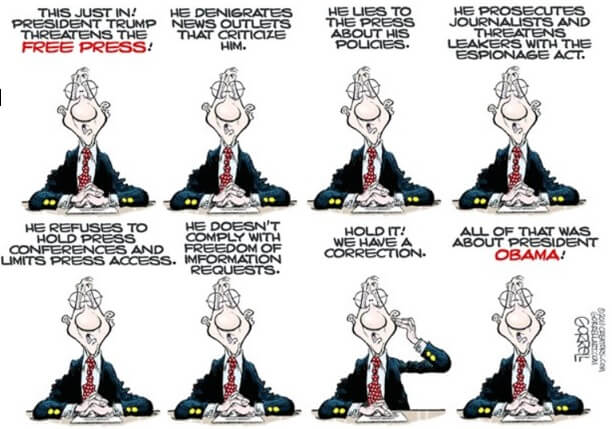 The media’s double standard is that they overlooked countless Obama’s violations.  The conservative double standard is that Trump does things that conservatives would cry heresy if Obama did it. Trump’s 2017 suggestion that broadcast “licenses must be challenged and, if appropriate, revoked” seems a lot like Obama’s using the IRS to deny non-profit ‘licenses’ to hundreds of tea party groups (of which they just won a settlement vindicating their case).

The President’s latest remark that the media is “enemy of the people” is a terrible anti-democratic statement to make. The context the President explained is that media have been leaking secure White House communications which do, in fact, undermine our democracy.

Saying the media is the enemy also undermines our democracy and the good journalists and media sources I have depended on during my lifetime to expose government corruption and waste of taxpayer dollars.

Saying the media is the enemy of the people also undermines the advancement of free-market principles and the President’s own programs. Right now, there are hundreds of good bills passed by the House that are stuck in the dysfunctional Senate. These good bills could vanish forever depending on the electoral changes arriving in less than 100 days. The President should be following the Legislative success of Reagan and use his bully pulpit to break the fragile logjam in the Senate and unleash hundreds of government reforming bills. Instead this month the President is fighting his own daughter (who rejected his media statement) and fighting the media (for whom 70 news outlets have united against this statement) while at the same time finding time to pick new fights, like with the nation’s top NBA star.