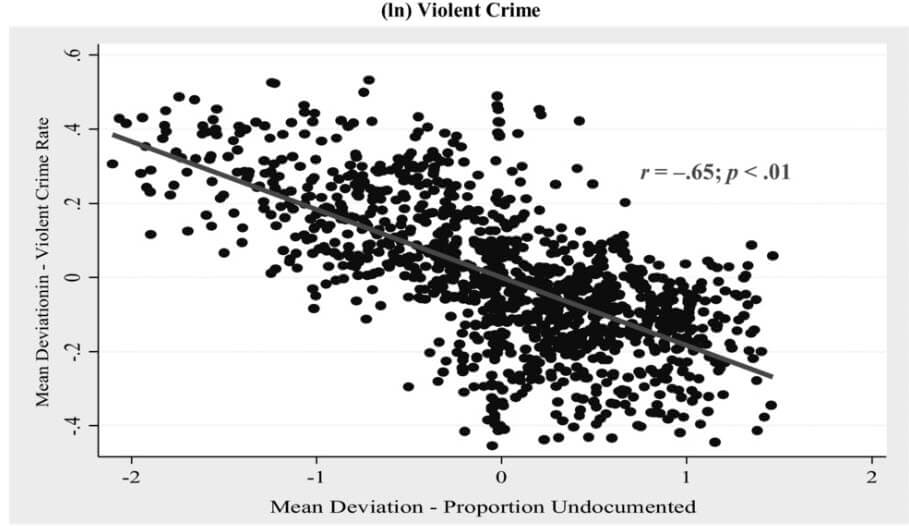 Earlier this week, I spoke on the topic of immigration at the monthly meeting of the Redmond Patriots. Bob Perry deserves a lot of credit for maintaining a forum like that for folks in eastern Oregon to discuss public policy in both an in-depth and civil manner. Much of my presentation covered material that I’ve covered here on the pages of the Oregon Catalyst, but I have not yet written about crime.

It is a fact that Cristhian Rivera has confessed to dumping Mollie Tibbetts’ body in an Iowan corn field. It’s also a fact that he is an illegal immigrant. Drawing the conclusion from this that having less immigrants among us, or even less illegal immigrants, will reduce the homicide rate in the United States assumes a fact that’s not in evidence: that immigrants commit homicides at a higher rate than we naturally born Americans do.

The opposite is the case. Even illegal immigrants commit homicides at a lower rate than we do; so among the reasons for reducing illegal immigration, reducing our homicide rate cannot be said to be one of them.

That immigrants in general have lower crime rates than native born Americans has long been an established fact in the criminology literature, but it’s hard to separate the legal immigrants from the illegals since states have long only tracked whether or not a convict is born in the United States. Earlier this year, Alex Nowrasteh of the CATO Institute was able to publish an analysis of data from the one state that started diligently recording the legal residency status of each criminal conviction in 2015: Texas.

Only the first year’s data is available. Conviction stats have a bit of a lag, but here are Nowrasteh’s results for all criminal convictions in Texas: 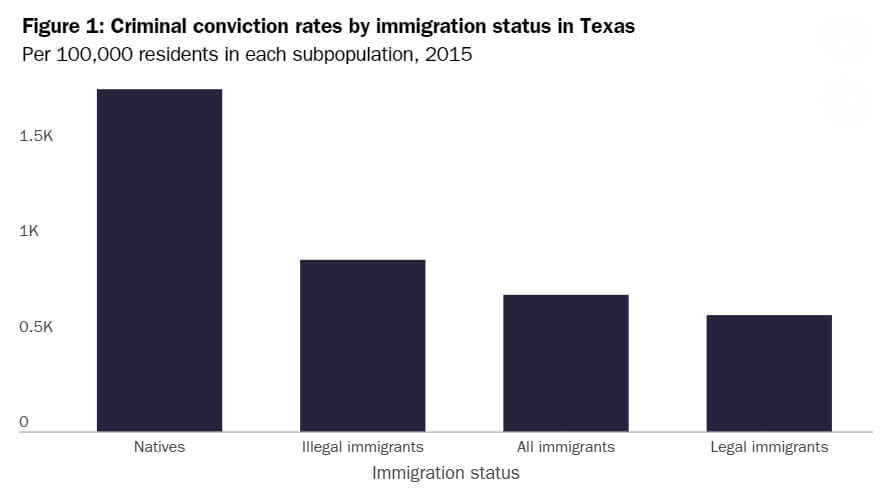 Immigrants are so significantly less likely to commit a crime than native born Texans are, deporting them would actually raise Texas’ crime rates. The same is the case for murder. Here are the results for homicide: 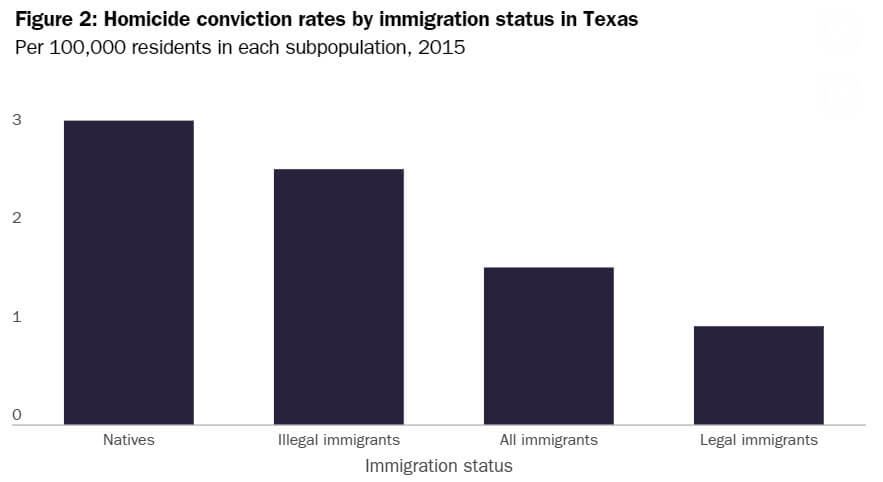 Hopefully other states will start tracking this data as well as Texas. Of the reasons not to be a sanctuary state, having good data should count as one of them.

Given the significant number of illegal immigrants in Texas, it’s likely a good proxy for what’s going on in other states, but we don’t have to just assume that. There are other means of measuring the relationship between illegal immigration and crime. In the journal Criminology, the leading peer reviewed publication of that field, Michael Light and Ty Miller published a panel data analysis showing that across time (1990-2014), the states with the highest portion of illegal residents have statistically significant lower violent crime rates than states with less residents that entered the United States illegally. The scatter plot at the top of this page is from their paper, showing violent crime aggregated together. Here is the distribution disaggregated by violent crime sub-type: 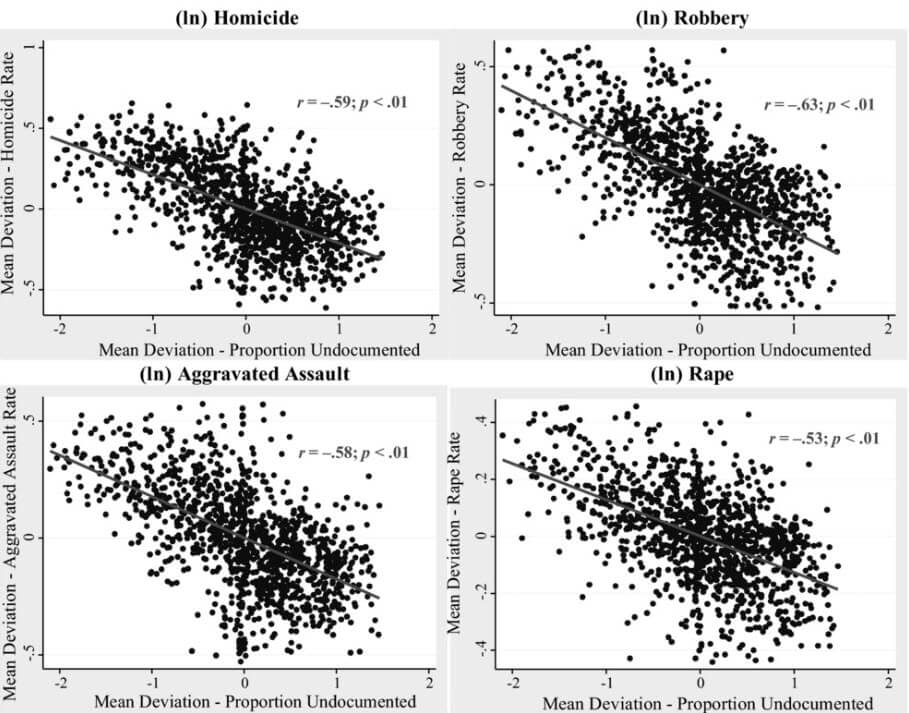 Like the aggregate numbers, in each category of violent crime, when the proportion of a state’s illegal population increases, the rate of its homicide, robbery, aggrevated assault, and rape declines. Illegal immigrants’ presence has the effect of reducing the probability one of these things will happen to you or a loved one.

If Cristhian Rivera wasn’t in this country illegally, Mollie Tibbetts would not have been murdered, but a similar statement can be said about any of the other many random things that put her in the right place at the right time to be killed that have no correlation with crime. If she didn’t spend the summer in Iowa, she would not have been killed either. Like the presence of illegal immigrants, staying in Iowa does not increase the probability of becoming victimized by random violence.

Since native born Americans are more likely to commit the kind of violence that was perpetrated on Mollie Tibbetts, the same bad argument can be made against American childbirth. It could be said that if the two U.S. citizens that procreated the killer had never brought him into this world, then the victim would still be alive, but reducing our fertility rate would not reduce our homicide rate either.

The desire to exploit a tragic death caused by a random killer to make invalid inferences is a movie we’ve all seen too often before. Isn’t that exactly what progressives do with every gun death, make invalid inferences about gun ownership? When conservatives use the same faulty left-wing logic, they too end up drawing erroneous conclusions.