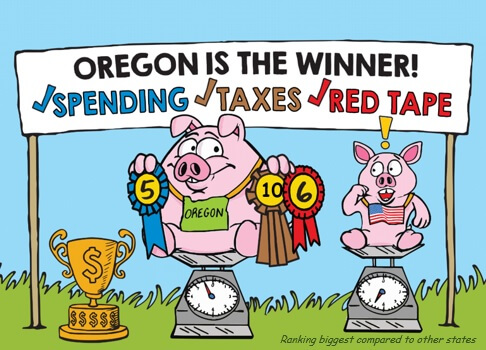 Here is how Oregon ranks compared to other states.

#5 on Spending: Oregon state spending per person is the 5th highest in the nation, outpacing the national average by more the 55 percent, according to the Kaiser Family Foundation. The most recent information from the Census Bureau shows state and local government in Oregon spends $11,300 per person, which is about 7 percent higher than the average across all states. Over the same time period, personal income in Oregon was 8 percent lower than the national average.

Comparing Oregon to other states helps us understand and communicate how prosperous the State of Oregon government actually is.   We also included regulations as they are a different form of taxation because government gets to achieve a goal for free but at a significant expense to a small business or a taxpayer family budget.

— Was this helpful?  Why not make a charitable contribution so we can reach more people?
— Or you can donate for free, without cost, by adding “Taxpayer Foundation of Oregon” as the the preferred charity for your Amazon purchases and Amazon will donate .5% of your purchases to our Foundation at no cost to you.