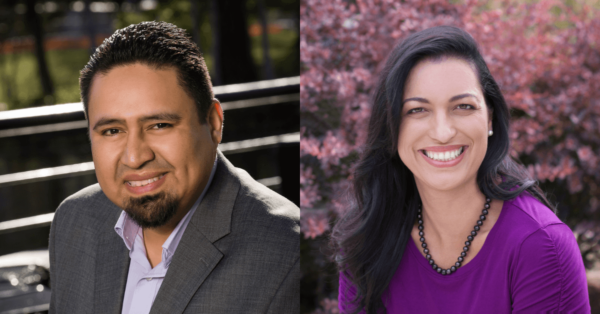 The race for Oregon Legislature turned ugly in recent days as top Oregon Democrats and their activists launched racist smear campaigns in an attempt to prevent two Republican, hispanic candidates for Oregon Senate from winning close elections. The attacks arrived in the waning days of National Hispanic Heritage Month which is observed from September 15th to October 15th each year.

Alexander Flores is running an insurgent campaign against incumbent Chuck Riley (D-Hillsboro) in Washington County. The attack on Flores arrived in the form of a mailer paid for by the Democratic Party of Oregon. The front of the mailer is a photoshopped picture of Alexander Flores with a sideways hat meant to evoke a racist caricature of Hispanic-Americans. This isn’t the first time Riley has had issues with racism. In 2015, Riley was caught on video saying that slavery was “right for the time.”

In Southern Oregon, Jessica Gomez is facing off against liberal activist Jeff Golden of Ashland. A YouTube video published by a liberal activist group likens Gomez to an ax, chopping down the fellow “trees” of her Hispanic community. “Just because someone’s name sounds Latino doesn’t mean they support programs that benefit our community,” is displayed alongside the crudely drawn graphics.

The ad is paid for by the Mi Voz Cuenta PAC which took money from Golden supporter and former Senate Democratic candidate Tonia Moro ($1,000) and the Jackson County Democratic Central Committee ($300).

The Independent Party of Oregon and their leadership took to Twitter, calling on the parties responsible to withdraw and apologize for racist ads in the Flores race.

We call on the @ORDems and @ChuckRiley2014 to withdraw & apologize for the vile photoshopped race-baiting photo included in a false negative attack yesterday on Alexander Flores, chairman of Centro Cultural of Washington County. #orpol @CausaOregon @centrocultural @diego4oregon

We call on the @ORDems and @ChuckRiley2014 to withdraw & apologize for the vile photoshopped race-baiting photo included in a false negative attack yesterday on Alexander Flores, chairman of Centro Cultural of Washington County. #orpol @CausaOregon @centrocultural @diego4oregon

Senator Jackie Winters issued a sharp rebuke of the racist ad against Gomez. “This type of hateful, racist speech is exactly what we don’t need in Oregon politics today,” she said.

The Democratic Party of Oregon, Senator Chuck Riley, Mi Voz Cuenta, Tonia Moro and the Jackson County Democratic Central Committee have all so far refused to apologize and withdraw the racist materials in question.

Online donations can be made to Alexander Flores and Jessica Gomez to help them fight back against these bigoted attacks.