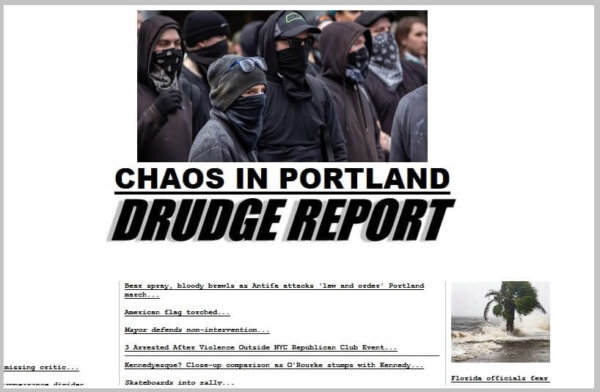 It was the front page headline on Drudge Report all day Sunday about the street chaos in Portland where violent Antifa protesters are seen harassing people and engaging in violence.

Other newspapers are noting this as well.

Here is a video from a few days ago when Antifa attacks an elderly man in his car.

Here is violence from the weekend. Terrible to watch.

Portland Mayor Ted Wheeler has already drawn criticism for denying police protection to groups he doesn’t like (see recent denying police help during ICE protest which has drawn a criminal investigation & his initial denial of pro-Trump group a rally permit).   Portlanders I know are being afraid to go downtown and fear a new season of lawlessness in the streets of Portland.

When Portland Mayor Ted Wheeler refused to help federal ICE agents we at the Taxpayer Association created this cartoon that sums up the mayors priorities.

Please urge the Portland mayor, Ted Wheeler, to restore peace and security to the streets of Portland and to honor police protection to all Americans regardless if you their political beliefs.

— was this article helpful? If so, please support our efforts at the Taxpayer Association of Oregon here. We depend on small grassroots donations to keep us strong.