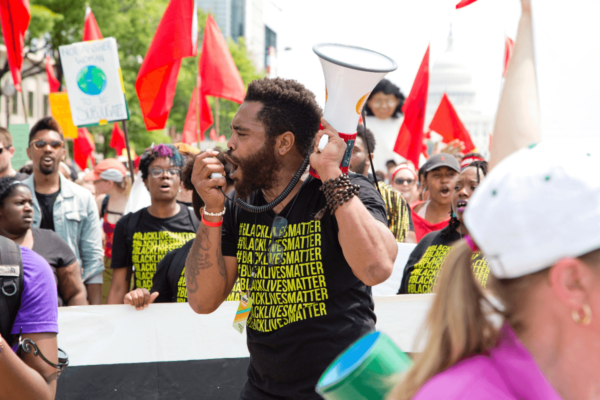 Never think it can’t get worse in Portland.

Because you’ll likely be disappointed.

Astonishing videos were taken just days ago of members of Antifa blocking access to major roads in downtown Portland.

Law enforcement officials were nowhere to be seen.

These demonstrators weren’t just blocking the road, but ordering directing traffic to turn onto different streets.

Unfortunately, this incident represents a much deeper problem facing Portland and its growing number of residents who have had enough.

Police are continually forced to take a hands-off approach to dealing with civil unrest, turning the city towards lawlessness.

Portland ranks third in the nation’s largest cities for car theft per capita.

Trash and used drug needles are scattered on major streets.

Repeat offenders are released and those with mental health issues are clearly not being given the care and support they need.

Businesses are being forced to close down due to transient camps and people have started avoiding certain areas downtown.

A Columbia Sports employee was forced to run into moving traffic after a man chased her and threatened to kill her.

Members of the Immigration and Customs Enforcement in their Portland office remained trapped by an angry mob of protestors.

Wheeler ordered the police to stand down because he does not agree with ICE’s mission.

“I’ve consistently stated that I do not want the Portland Police Bureau engaged in securing federal property that houses a federal agency with its own police force,” he noted during the debacle.

These are serious issues and much of it is due to lax policies that don’t allow our men and women in blue to do their jobs.

But this incident is a major escalation even from the incidents listed above.

To start, the video was recorded and edited by an individual named Brandon Farley.

Farley bills himself as a videographer who “records disruptive events in downtown Portland.”

Yes, an individual is literally making a living off the lawlessness on our streets.

That’s how low we’ve seemed to have stooped.

Thankfully, Farley was there to obtain this incredible footage.

It begins with a woman in a black hoody who demands an elder driver to not drive down a specific street. Of course, he asks why?

She then screams at him “because I told you to!”

Another Antifa member comes in to back her up and yells “Yeah brother! Yeah you white little f**ker! Yeah, you’re a f**king whitey, aren’t yah!”

A second video shows an elder man driving past the protestors – refusing to follow orders.

As he tries to pass, his car is violently attacked by Antifa members.

Some wielding what look to be police batons and baseball bats.

The man speeds away and is chased down by protestors who force him out of the vehicle.

They give his car a good whack on the window before he finally speeds off.

All of this begs the question of who exactly runs Portland?

Is it Ted Wheeler and the police (who both, by the way, have not released a public statement to this point).

Or is it Antifa and its gang of enforcer thugs?

Not to mention, this story drew national attention.

It was sputtered across Fox News and other major news organizations.

Portland and Oregon as a whole were embarrassed again on the national stage.

Ted Wheeler came into office boasting himself as a “transitional mayor.”

And he certainly wasn’t wrong.

Portland has transitioned into a city that allows mob rule and lawlessness to flourish.

Anarchy seems to be the norm in downtown Portland.

Alexander (Alex) W. Titus is a Public Interest Fellow and conservative political activist based out of Washington, DC, and Portland.  You can follow him on Twitter @atitus7.