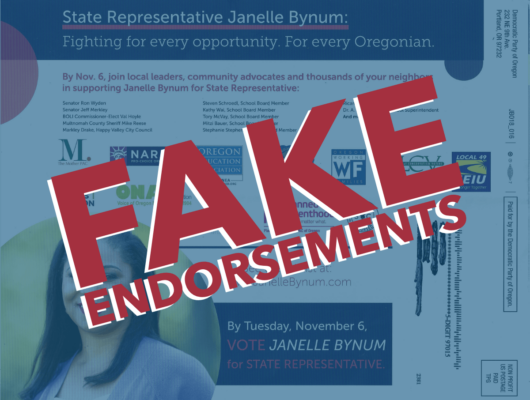 Salem, Ore. – Janelle Bynum has some imaginary friends. For the second time this election cycle, she has been caught claiming an endorsement from a local elected official she has not earned. Bynum’s campaign sent out a mailer on Thursday citing an endorsement from Happy Valley City Councilor Marley Drake. The problem? Drake has endorsed Bynum’s opponent, Lori Chavez-DeRemer.

“This is the second time this election that Janelle Bynum has claimed an endorsement from an elected official she has not earned,” said Preston Mann, Executive Director of Promote Oregon Leadership PAC. “This is sloppy campaigning at best and a blatant attempt to mislead voters at worst. Bynum owes the voters of HD 51 an apology and an explanation for why this keeps happening.”

“Janelle Bynum cannot continue to mislead voters like this,” Mann concluded. “Claiming the endorsement of a public official who has endorsed your opponent is just plain wrong.”

A copy of the mailer can be seen here.