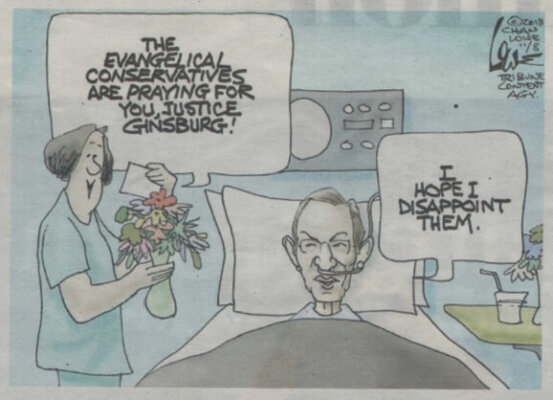 Twice in the last few weeks The Oregonian has published unfunny and distasteful cartoons unfairly demeaning conservatives. This week it was a cartoon depicting Christians praying to God to speedily kill or keep ill Supreme Court Justice Ruth Bader Ginsberg.

That joke is so removed from reality of what the Christian conservative community is about I can only fathom what kind of mean spirited distorted reality did this cartoonist get such an idea.

Would the same Oregonian publish a cartoon depicting Jews praying for the death of a Muslim judge?

To depict Christians being viscous to a Supreme Court Justice after what we witnessed what happened to Kavanagh and that disrespectful circus where no less than four accusers recanted, pulled-back or admitted that they lied.  Did Christian conservatives viciously demonize Souter and Kagan during their hearings?

The second offensive cartoon came during Halloween where the Oregonian ran a cartoon showing a GOP elephant in horror at the trick or treaters at his door. One kid says “I’m a minority voter”, another “I’m a women voter” and another “I’m a youth voter”. Depicting Republicans as horrified at black people or Hispanic people is a new low for The Oregonian. Quite unfair since Oregon’s highest ranking Legislative political figure is Senator Jackie Winters, a proud entrepreneurial African American woman. The top two new Republican Senate candidates this year were a Hispanic woman and a Hispanic man. Interestingly, they both won contested races in their Republican primaries (Republican voters only) but not in the more public general election which includes Democrat and Independent voters. Does that mean the general Oregon voting public are racist? Of course not. See how the vital topic of race can get so twisted — just like the cartoon. Racial issues are too important to trivialize and politicize.

Various Oregon conservatives and groups need to do more to reach and win the hearts of minority voters, but their shortfalls does not translate to hate, loathing or specifically horror as the cartoon depicts.