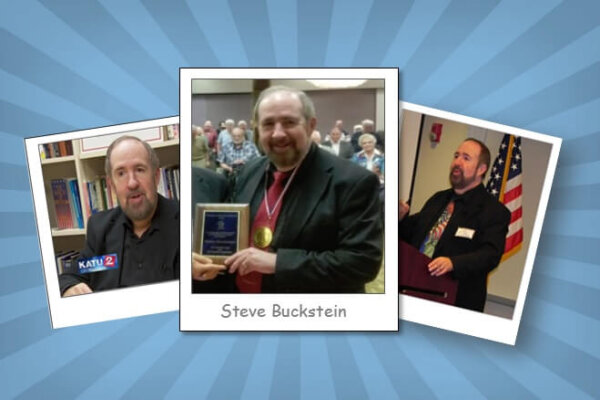 We refuse to accept Steve Buckstein’s retirement from the legendary free enterprise organization, Cascade Policy Institute, he founded close to 30 years ago!

The departure of Steve Buckstein from watching over our government will surely put our state at risk of sudden decline of freedom while witnessing a possible rise in new taxes, crushing regulations and more holes in our sacred Constitution.   Oregon cannot afford to let Steve Buckstein have a normal retirement life.

These witnesses testify to Steve’s importance…

“Steve Buckstein has been a faithful advocate of free markets and free people for over 25 years.  A brilliant man, his influence on Oregon policy, as well as its leaders, has been significant.  Steve has done all of that with the humility of a true statesman.”
Hon. Mike McLane
House Minority Leader

“I’ve always seen Steve as the “Happy Warrior” of Oregon public life, but that really doesn’t do full credit to what he’s been for 25 years here. He’s fought unfailingly with intellectual rigor, analytical precision and principled passion in addition to good cheer. It’s hard to imagine Oregon public life without him but he’s helped create and shape an organization to continue the fight.”
Dave Reinhard
Former Oregonian Editorial writer

“From the very beginning of my talk show, “The Bill Post Radio Show” I found Steve Buckstein to be an invaluable resource not only for information for my own use but as a great guest whenever I had him on the show. He was always able to take complicated policy and make it easy for a radio audience to understand in a short segment. When I became a Legislator, that ability to pass on information helped me considerably when looking at bills in the Legislature. The legacy he leaves at Cascade Policy Institute will be one of service and great knowledge. I wish Steve all the best in his retirement!”
Bill Post
State Representative

“Steve Buckstein founded Cascade Policy Institute on the principles of individual liberty, personal responsibility, and economic opportunity. These values resonate with small business – and mirror NFIB’s own mission statement:  to promote and protect the right of our members to own, operate and grow their businesses. For nearly three decades, Steve has been a steadfast friend of Oregon’s small businesses. We wish him all the best in retirement and congratulate him on a job well-done.”
Anthony Smith
NFIB Director

“I first met Steve in the early 1990s when I was working for a US Senator from Minnesota, Dave Durenberger, whose state was in the national forefront of the “school choice” movement. I was always grateful that Steve had the wisdom and the  ability to bring that issue to Oregon.”
Jim Pasero
Third Century Solutions
& Brainstorm Magazine co-founder

“When I travel around Oregon, it is easy to see that Steve Buckstein and the Cascade Policy Institute have had a major impact on the state. But when I travel elsewhere in the United States, I find that the Steve also turned the Cascade Policy Institute into a training ground for think tank leaders elsewhere, including Tracy Sharp, who currently heads the State Policy Network, and Todd Wynn, former vice-president of the American Legislative Exchange Council (and currently in the Department of the Interior).”
Randal O’Toole
Cato Institute
Camp Sherman, Oregon

“I am very thankful to Steve Buckskin for all the help he has given us over the years. Helping us to understand policy and the effects it has had or will have on Oregonians has been invaluable. Enjoy your retirement, and again thank you.”
Hon. Herman Baertschiger
State Senator

“Steve Buckstein’s passion for good government is a legacy that will live on with the continued good work of Cascade Policy Institute which he founded”
Hon. Jeff Kropf
Oregon Capitol Watch

“I can only say that I hope he comes back out of retirement soon because we need him!”
Hon. Kim Thatcher
State Senator

“Steve is always the most reasonable man in the room, if not the smartest. Since the time I’ve known him, he has conducted himself with the aplomb of a diplomat and the smarts of a game theorist, all while using his understated, sardonic humor to best effect, probably so he doesn’t lose his mind in enemy territory.  Steve’s never played small-ball. Whatever his individual mission it has always been in service to a greater idea, which is greater freedom for everyone – except those greedy bastards in government.”
Victoria Taft
Oregon writer and former radio host

“Steve Buckstien is like a modern Founding Father of Oregon.  He stood up for liberty and principles ahead of its time — before they became populary enshrined into law.   He has been both virtous and eloquent for his beliefs which makes his voice one to be emulated for future generations.”
Jason Williams
Founder
Taxpayer Association of Oregon

——— Be free to join the honors in the comment section