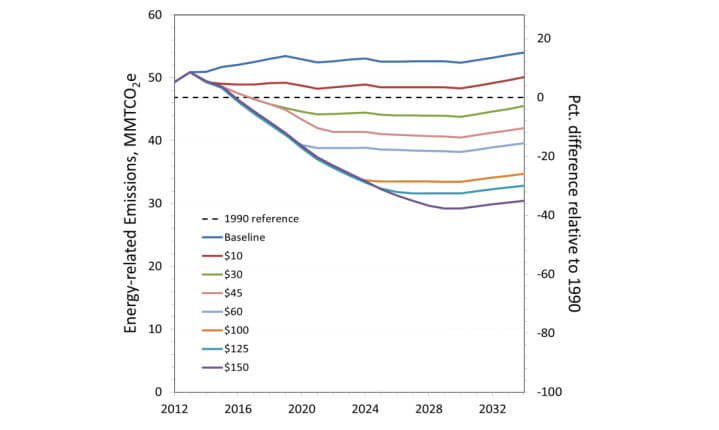 I’m still waiting for the supporting math behind the research contracted by the Governor’s Carbon Policy Office, purporting to show a benign economic impact from implementing cap and trade in Oregon. Last week I pointed out that they forecast a remarkably low cost of carbon.

Here’s why that’s a paradox. The prevailing research shows the price of carbon will have to be significantly higher to get us to actually reduce carbon emissions on the level that HB 2020 mandates. For example, the 2013 legislature passed SB 306 which funded a detailed study on taxing carbon in Oregon. The widely respected Northwest Economic Research Center (NERC) was contracted to do the study which was released in December 2014. NERC found that even the top rate of taxation they considered, $150 per metric ton, would only reduce Oregon’s carbon emissions down to 35.2% of its 1990 levels by 2034, which is actually less stringent than HB 2020’s cap of 45% by a year later.

Berkeley Economic Advising and Research is claiming much bigger cuts in carbon will merely require a price that’s less than 1/7th of what NERC found. Both cannot be true. What do you suppose the BEAR Report’s economic assessment would be if they predicted carbon prices as high as NERC’s? I suspect the results would be so bad, they’d never have been made public. So why can’t the public see all the math behind the BEAR Report’s optimistic results?