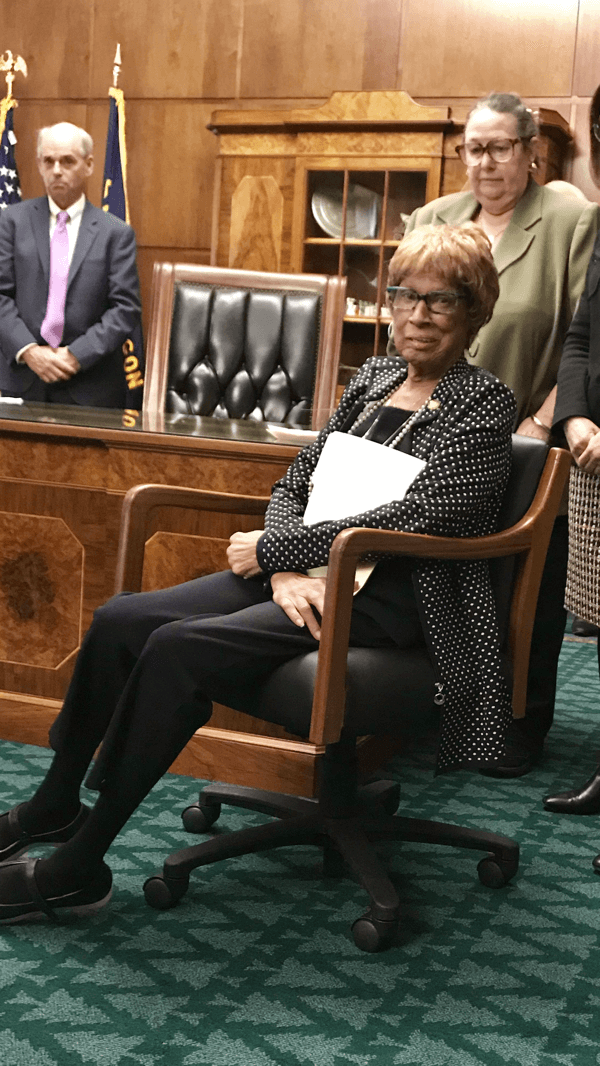 Remembrances continue to pour in on the passing of Sen Jackie
Winters and rightfully so. Jackie’s influence was wide and loving with a uniquely
bipartisan style while holding true to values that would later be defined as “Oregonian.”

She was my political mentor when I first was elected to the
Oregon House of Representatives in 2000. Our offices were located next to each
other on the second floor of Lang office building and we became fast friends.
It was no accident that the universe chose her for me as I truly believe her
spiritual influence has remained inside me to this day. We continued to talk as
she always would receive my phone calls.

She taught me many values as a legislator and a woman. How to
use budgets to obtain the policy you want. How to stand firm on political
beliefs while respecting other’s points of view. How to respect all people
regardless of background, race, or belief system. That factions could disagree
and be just fine. That love always wins.
I trusted her deeply as she was 20 years older and seemed wiser beyond what her years would dictate.

When she occasionally voted contrary to a Republican bill or
belief, it would cause me to smile knowing she had deep rooted reasons behind
her decision bred from life experience that only the first and only elected African
American Republican woman in Oregon could see.

Elected in1998 she seemed to have experiences most legislators
didn’t. She served as Ombudsman to Gov. Tom McCall, a position she loved with shared
lessons. During that time, she met her beloved Ted, who himself came way of
redemption as a convicted felon. They married and he lovingly raised her four
sons, dotted on Jackie and supported her many endeavors.

I frequented their home in Salem, dined at Jackie’s Ribs, a restaurant
she started with several successful Salem locations while she carefully passed
onto us her views on Oregon politics, life and love.

Many stories come to mind. Several times she would rush into
my legislative office searching for an elastic hair twisty to tie back her long
locks hoping my 11-year old daughter had left one behind.

She took fondly to my daughter knowing how hard it was for
members to serve with young children. She shared her own ordeal as an 11-year
old living in Vancouver surviving the great Vanport Flood that devastated her
family home yet all survived. I believe that single experience helped formed
her character.

And she could shake it. While during a rehearsal for the
Dorchester Conference, a small group of Republican women were slated to sing
and dance on stage during the famed “tent show.”  As we gathered for rehearsal, I was so excited at singing to a popular tune and my one chance to become a Tina Turner impersonator.  She looked at me with her famous frown and shook her head deliberately and said “Tootie, there’s only one Tina Turner in this room, and, Sista, it aint you!”  I was delegated to backup singer and dancer, received the hook, and Jackie became the star, as was ordained.

Although our backgrounds growing up seemed worlds apart in
ethics and thought, I soon learned we shared so many of the same attributes. I,
coming from a working-class family farm sheltered in rural Clackamas County and
her urbanite upbringing exposed to discrimination and trials that most of us can’t
know or understand. We shared support for the voiceless, a fierce independence
and work ethic among them.

At the end of the 2001 session, I had used both my priority
bills. An unexpected disaster occurred in my district where where the Corps of
Engineers were holding back water from Detroit Reservoir keeping farmers
downstream from irrigating their precious crops.

She generously gave me one of her remaining priority bills that
instructed the United States Congress to fix the problem.  The bill passed the house of Representatives but stalled in the Senate and time was running short. One afternoon she marched into my office demanding the bill be passed and wondering why I wasn’t “working it”. Excuses didn’t matter and she told me to march over to the Senate Chamber and get it passed. As a freshman legislator, I didn’t know I could do that! So, I did, and the bill passed. With Jackie’s influence I’m sure. Water was released and the Willamette Valley savored the farmers crops. Thank you, Jackie!

My memories of lessons and shared battles won and lost with
Jackie will remain with me forever as there are too many to mention. I love you
dearly as one would a family member or close friend and will always weep for
you deep within my heart. Thank you for being allowed to call you friend.

Tootie Smith is a 4th generation Oregonian, professional speaker and published author. Smith is a former elected State Representative, Clackamas County Commissioner and Republican nominee for Congress. She can be reached at tootiesmith.com or email at [email protected].