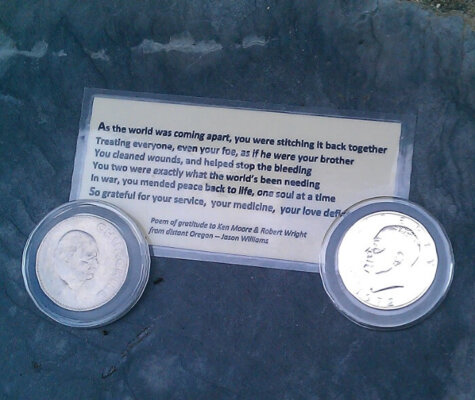 In 2013, I wrote a poem to honor one of the most amazing stories to come out of D-Day and left the poem (along with a Churchill and Truman coin) at the site of the Angoville-au-Plain church where the incident took place.  For nearly two days straight during D-Day, medics Ken Moore and Robert White, treated the wounded inside a church while the battle switched hands several times.   The blood stains on the pews can still be seen today.  Also the church erected stained glass windows to honor the medics.   I encourage all Americans when traveling overseas to war sites to not just visit them but to leave tributes as a form of remembrance and appreciation. 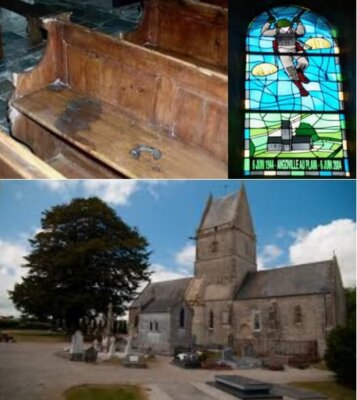 As the world was coming apart, you were stitching it back together
Treating everyone, even your foe, as if he were your brother
You cleaned wounds, and helped stop the bleeding
You two were exactly what the world’s been needing
In war, you mended peace back to life, one soul at a time
So grateful for your service, your medicine, your love defined

Here is the Story of Angoville-au-Plain.

In the early hours of June 6, 1944, the 1stand 2ndBattalions of the 501st Parachute Infantry Regiment (PIR) of the 101stAirborne Division parachuted into the fields, hedgerows and marshes of the Norman countryside. The military objective of the paratroopers was to seize the bridges and canal locks south of the village of Angoville-au-Plain in order to prevent German reinforcements from reaching the beach landings of Allied forces, which would commence soon after sunrise. The fighting surrounding the village continued unabated for over 48 hours with the village changing hands a number of times as the US paratroopers fought their German paratrooper (Fallschirmjager) counterparts for control of the area surrounding the village. The church of St. Come and St. Damien at Angoville-du-Plain dating from the 12th century, is located at a strategic crossroads and had been pre-designated as an assembly area for the 501stPIR. As the combat raged, many US paratrooper casualties were brought to the church where two 21 year old US Army medics from the 501st, Private Robert E. Wright from Ohio, and Private Kenneth J. Moore from California, had set up an aid station to treat the wounded. They worked around the clock for two days treating both US and German wounded using the church floor, the pews and the altar on which to place the casualties.

At least three US paratroopers died in the church and many more in the square and the fields around the town. The town square and the church changed hands between the GIs and the Germans several times over the course of the two days, yet the two US medics continued to continuously treat the wounded despite the overwhelming exhaustion that both men were experiencing. At one point a German patrol burst into the church. At first the German officer leading the group made threats about killing Moore and Wright as well as the American wounded. Moore convinced the officer that killing the Americans would result in the loss of the German wounded as well. The officer relented and had more German soldiers brought into the church for medical attention.

Further, Moore insisted that all the German soldiers –as was his rule with American forces -must leave their weapons outside of church if he and Wright were to treat the wounded Germans, a demand to which the Germans complied. The town was under constant shelling and at one point a mortar round burst through the roof of the church and hit the floor. Miraculously, the shell imbedded itself in the floor but did not explode. The repaired hole in the roof and the cracked floor are still visible today as are the blood stained pews where the wounded lay. At one point on June 6 two German soldiers appeared from behind a doorway in the church. They had been hiding in the bell tower the whole time observing through cracks in the ceiling the treatment the medics were giving to the wounded on both sides. They volunteered to help the medics and were immediately set to work using a two-wheeled farm cart to scour the fields and hedgerows for wounded and bring them back to the church.

At one point 75 wounded American and German soldiers filled the tiny church. The patron Saints of the church are Saint Damien and Saint Come –both of whom were medical doctors. Legend has it that the two saints watched over the medics and the wounded and that the two medics were themselves angels. During the fighting on June 6-8all of the medieval stained glass windows in the church were blown out. In 2004 the citizens of Angoville-au-Plain formed an association to secure donations that would be used to replace the church’s stained glass windows and to honor Bob Wright, Ken Moore, and all the allied soldiers who fought and died in the area around the town in 1944. The effort was successful and all of the stained glass windows have now been replaced. Both Bob Wright and Ken Moore survived the war and returned to Angoville-au-Plain many times. Bob passed away on December 21, 2013 and Ken on December 7, 2014.