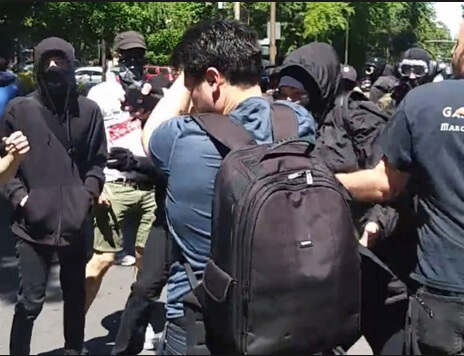 ‘No hate! No fear!” chanted the left-wing crowd as they marched downtown Saturday. I walked to the front of the line to record the protesters with my new GoPro camera when I was suddenly slammed on the back of my head with something hard. Dazed and still hearing faint chants of “no hate,” I was then punched and kicked by perhaps a dozen masked people in black. At an Antifa event meant to resist “fascist violence,” I—a gay journalist of color—was beaten so badly that I was hospitalized for a brain hemorrhage.

Since last year, I have been targeted by Antifa and its allies for my critical coverage of their violent extremism. I’ve reported those incidents to the Portland Police Bureau, and in some cases I’ve identified suspects, but there were no arrests. The mainstream media describe Antifa as “antifascist,” but in fact it is a far-left paramilitary-style movement of anarchists and communists agitating for a revolution.

Antifa is known for wearing black and concealing faces with masks to commit crimes under the protection of group anonymity. The Homeland Security Department has described some of Antifa’s activities as “domestic terrorist violence,” but Portland recently voted to withdraw from the Joint Terrorism Task Force, citing concerns the Federal Bureau of Investigation targeted left-wing activists.

On June 29, Antifa organized a milkshake-themed counterprotest against two small right-wing groups. The event was inspired by the new practice—a British import—of throwing milkshakes on conservative or right-wing figures. Vox.com’s Carlos Maza encouraged such assaults in a May tweet: “Milkshake them all. Humiliate them at every turn. Make them dread public organizing.”

As soon as I arrived at the staging area in a downtown park, masked protesters began to follow me. One person openly carried a metal bat. In a July 2 news release, the Portland police reported that officers had observed “participants in the crowd who concealed and brandished weapons, including collapsible batons, projectiles, and firearms.” At various points I was threatened, cursed at, and blocked from walking around. I ignored them. Police watched from a distance and did nothing.

Later, a masked person approached me from behind, dumped the contents of a cup on my head, and ran away. The paper cup had an Antifa logo on it and was handed out at a “shake station” in the park. I immediately reported the incident to police. Officers told me they would not approach the suspect, who was still in sight, because that might “incite” the crowd. This is a refrain I hear every time Antifa harasses or attacks me with a Portland police eyewitness present. Policing in the city has become so feckless that neighboring county deputies are withdrawing or reducing their support for the Portland police.

Minutes later, another “shake” was hurled at my face. It splashed under my goggles and went into an eye, which stung and obstructed my vision. Again, I reported this to police, who demurred.

Now in the hundreds, the crowd proceeded to march. They shut down traffic and blocked the roads. At one point, the crowd walked in front of the Multnomah County Justice Center, which houses the Sheriff’s Office, the central police precinct and courtrooms. Though I didn’t see police, I assumed they were close. I was wrong.

That was when I walked toward the front of the march, where I was set upon by a mob, some wearing fiberglass-hardened gloves as well as masks. They pummeled me in the face and the back of the head until I let go of my camera, which somebody snatched. I raised my arms in surrender, but the mob took that as a signal to become more aggressive.