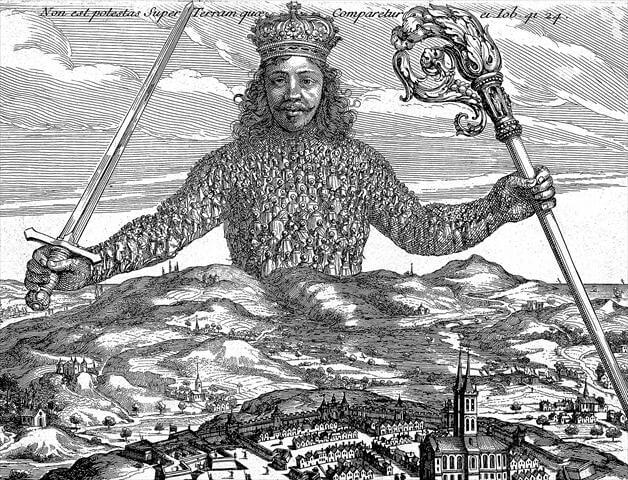 Classical Conservative social contract theory was known and accepted by political thinkers and actors long before anyone ever formally wrote it down in a work of political philosophy, but the first person to do that both systematically and naturalistically was Thomas Hobbes in Leviathan (1651). All non-Western civilizations were unmistakably Conservative before European contact. Conservative political philosophy is itself a universal default position natural to human thought. It remained unchallenged until the rise of Modernity.

In Classical Conservative social contract theory, man is, always has been, and always will be inherently evil. Out of the disorder of the “state of nature” (an anarchic human society without a public system of justice), somebody strong emerged to create order by restraining his neighbors’ threatening behavior. To maintain order he dominated society by the hard-power of brute force, deterring the natural brutality of each other member of society with the threat of greater brutality in return. This strong-man and his tribe, clan, or allies, created a social elite in society, putting an end to the otherwise endless cycle of retributional violence. This dominance developed into a monopoly of the legitimate use of force for policing power: the “coercive power of the state.”

Shear brute force as hard-power is the external dimension to this authority, but the elite began increasingly to dominate society through an internal dimension: the soft-power of cultural supremacy. The elite began to define the sacred and the profane so that each member of society became knitted together as a community with shared cultural values.

Monotheistic societies have explained their social contract in terms of revealed law where political authority is understood to come from the one true God. Monotheism achieved the highest development of Conservative political culture where moral standards come not from the arbitrary whims of competing gods, but rather were handed down from a loving God that defines the meaning of Truth, Beauty, and the Good, giving these rules as a gift to ancient patriarchs that have now been passed down to us so that we might live the good life as well.

Conservatives have also recognized the earthly authority of kings and an elevated class of nobility, believing they were chosen by supernatural intervention into history (providence) or as the Chinese called it “the mandate of heaven.” The duty of every member of society to fill out the role God has placed upon them is emphasized over individual rights.

This was the worldview the American Revolution rejected. Most people in the United States who call themselves “conservative” are actually closer to being Classical Liberals. Yet there are elements of the old world that have lived on in America’s right-wing. Classical Conservatism is basically instinctual.