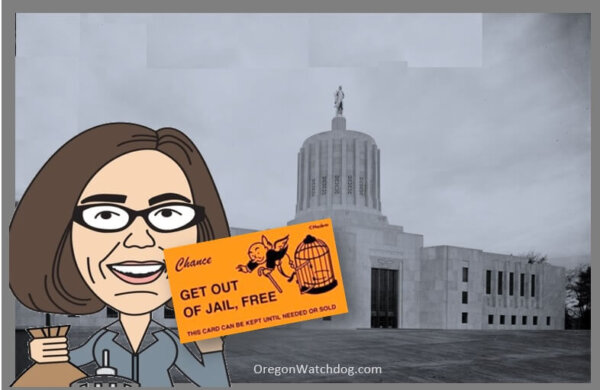 Governor Kate Brown decided to not call a special Legislative Session to fix a serious error in the new death penalty law.

As a result, 28 of 29 of Oregon’s most violent criminals an killers on death row will be taken of death row status and spared the death penalty. Despite the fact that voters put into the Constitution the death sentence, these heinous murders will be spared the voter-mandated death sentence and will live out their lives at further taxpayer expense.

As you may know, the liberal politicians promised that the 2019 death penalty reform bill passed this summer would not apply to current killers on death row. They lied. Only after the bill passed, was it discovered that it was not true based on a legal reading. Therefore, 28 of 29 of Oregon’s most undeserving, most dangerous and most heinous criminals will be getting a pardon from their punishments. The many crime victims from their killing sprees are now a victim of injustice all over again.

This is the same Governor who, after passing a $1.6 billion small business tax, then rushed to call the entire Legislature back into an emergency special session within 30 days for no other reason than to pass a tiny small business tax cut in order to look good in the media during the final months of the 2018 election. Yet, Governor Brown could not find any strength to advocate for the family of murder victims simply because there was nothing in it for her.

— Support the cause of exposing Gov. Kate Brown’s scandals with a simple donation to the Taxpayer Association of Oregon .

— 20 years of serving you. We’re not some new blogger or here-today-gone-tomorrow PAC.  We’ve been around since 1999, earned our merit badges, paid our dues, won some battles and wish to keep doing it for another 20 years if we can keep our founder alive.  Please donate.