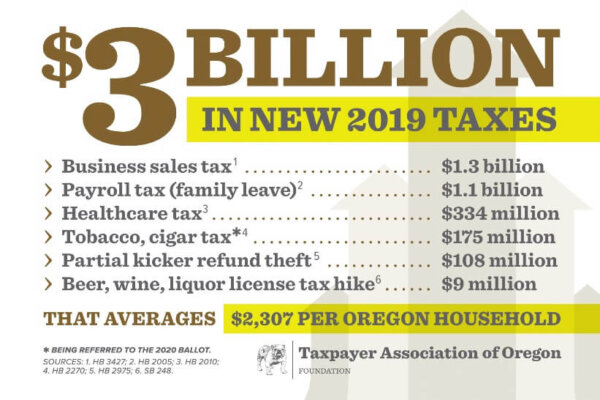 $1.3 billion Business Sales tax (HB3427) : House Bill 3427 (also called “Student Success Act”) imposes a 0.57% Commercial Activities (gross receipts) Tax on “business activity” (sales) exceeding $1 million per year, minus 35% of the “cost of inputs” (e.g. materials) or labor costs, plus a flat fee of $250.  It taxes business sales revenue so the public will not be seeing the tax on their sales receipt and business and the tax taxes revenue instead of profits so many businesses that are not making a profit will still be witnessing a tax increase.

$175 million tobacco, cigar, vaping tax (HB2270 is a ballot referral): HB 2270: Refers to next general election ballot an increase in cigarette tax to $2/pack from the current $1.33 per pack, raises cap on cigar tax to 65 cents/cigar from 50 cents per cigar, and a vape device tax of 65 percent of the wholesale price. If approved by voters in the next general election, it is projected to raise $119M in 2019-21 and $350M in 2021-23. 90% of the money goes to Medicaid, 10% to tribal health. New vaping device promotion: Take a toke for Medicaid! Other opportunities: Health Authority could resurrect “Joe Camel” in a “Camels for Kids” campaign!

$108 million partial Kicker Tax Refund theft (Hb 2975): House Bill 2975 uses a budget gimmick to steer nearly a quarter billion of kicker refunds back into the politicians’ hands. By over two-thirds vote, Oregonians put the Kicker Tax Refund law into the Constitution (measure 86) to prevent politicians from stealing their refund checks.

$9 million Beer, wine, liquor license tax increase (SB248): Senate Bill 248: Increases OLCC fees by $9.2 million, more than tripling fees for wineries, on premises service and brew pubs. Oregon moves from some of the lowest fees in the nation, which helped to promote these businesses, to mid-range among the states.