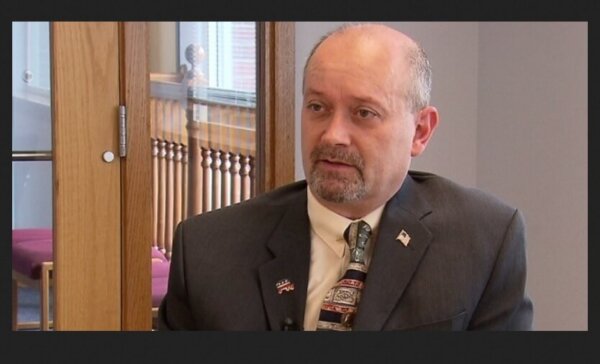 Recall and impeachment are such blunt instruments, yet they are now being applied to what are essentially political disputes, both locally and nationally. Why the rush to impeach President Trump? Or to recall Gov. Brown here in Oregon? Why not respect the public’s wisdom as applied via the ballot box and wait for the next election? That process has worked fairly well for the duration of our Republic. Impeachment and recall efforts have produced mixed results, at best.

In July, the Oregon Republican Party began circulating a petition to recall Oregon Gov. Kate Brown. Why have you sponsored this petition? What is the case for recall against Kate Brown?

The people of Oregon recognize that government derives its just power from the consent of the governed. They demand a governor that honors the will of the voters and works for the good of all citizens, not just special interests and political agendas. They understand that it is their right to alter government when it does not abide by these principles. Gov. Brown has subjected the people of Oregon to a long line of abuses of power while at the same time refusing to address their legitimate concerns. She has fostered a toxic political environment that stifles meaningful discourse. She has threatened retaliation against her own citizens when her political agenda is not successful legislatively and has threatened to usurp legislative power with executive orders to accomplish her highly controversial goals, thus circumventing our system of representative government and deciding for herself what is best for Oregon. Instead of changing hearts and minds, she wants to change the rules and the process, single-handedly. Gov. Brown has abused the office of governor and failed the people of Oregon.

At least 280,050 valid signatures are needed for the secretary of state to call a special “recall” election of Gov. Brown. Will you get them by the October 14 deadline? If there is an election, when will it be held?

Due to the immediate and enthusiastic involvement of thousands of volunteers around the state, we were on track for collecting the required number of signatures starting the first day of the signature collecting effort. However, our biggest challenge now is receiving the collected signatures in time to process them before submission to the Elections Division. If we don’t get them at least one or two weeks prior to the October 14 deadline, we may not be able to finish validating the required 280,050 signatures. The process requires many volunteers working around the clock validating signatures to ensure they are by registered voters and that there are no duplicates. This is critically important to reduce the number of invalid signatures, each of which has the potential to invalidate many more if not caught and removed. The election would be late November or early December.

In the past, Oregon Republicans haven’t necessarily trusted the secretary of state’s office to be an honest broker in verifying signatures on conservative petitions. Are you confident that Secretary of State Bev Clarno and Deputy Rich Vial will be fair (especially given that Clarno was appointed by Gov. Brown on a Sunday night and Dennis Richardson’s top three aides were unceremoniously sacked the following Monday morning)?

It is true that past Democrat secretaries of state have been very partisan in the execution of their duties. Thankfully, despite Gov. Brown’s demonstrated disposition for avoiding transparency and accountability, Dennis Richardson instilled a new standard of fairness that I believe is still in effect. I can say that in all aspects of this recall campaign, from the initial filing to the inevitable daily questions that arise, the staff at the Elections Division has been most professional and competent. At this point I have no reason to believe that we will not be treated fairly and in a non-partisan fashion.

In the last 20 years, there have been two high profile recall attempts of governors – one successful, and one not. In 2003, Democrat California Gov. Gray Davis was recalled by a vote of 55 to 44 percent and replaced by Republican Arnold Schwarzenegger. In 2012, Wisconsin voted 53-46 to retain Republican Gov. Scott Walker, after public employee unions attempted a recall to thwart his reforms. What’s your takeaway from those two historic recall efforts? If the recall election happens, what will be Oregon’s outcome?

No matter what happens with this recall effort, the voice of the people will be heard. The message that is being sent to Gov. Brown and the Oregon Democrat legislators is loud and clear: Represent the best interests of your constituents or face being removed. Gov. Brown, as did Gov. Davis, has tried to characterize this recall as an attempt to override the will of the 51 percent of voters that elected her, as if being elected gives her a mandate to do whatever she pleases, even if it goes against the will of those voters. This is just one example of the extreme arrogance she displays toward voters. The union attempts to remove Gov. Walker were not broad-based enough among voters compared to the growing strength of the many Oregon grassroots movements that have mobilized in the wake of the Republican Senate walkout.

In 2016, Kate Brown barely received 50 percent of the vote against Bud Pierce. Two years later, Gov. Brown again barely received 50 percent of the vote against Knute Buehler -– this time in an election where Republicans lost control of the U.S. House. Registration numbers haven’t improved – the state still leans left about 47-21-32. Do you worry that a recall election might backfire and create a more sympathetic and solidified electorate for Gov. Brown?

On a recall ballot, Gov. Brown won’t be running against a Republican. She will be up against her own performance, which even her own supporters and the liberal media have denounced. Voters will remember that she has repeatedly overturned the will of the voters on immigration and tax issues, denied citizens constitutionally guaranteed protections, attempted unsound environmental policy that would have severely damaged the economy, attempted to deprive families of medical and religious freedoms, failed to address the looming PERS crisis, failed to protect foster children, and pursued costly and politically-motivated multi-million dollar lawsuits against the federal government. In most of these egregious acts, she utilized the “emergency clause,” effectively denying the voters a voice on legislation they were sure to oppose. And the voters won’t forget, as they mark their ballots, how she not only failed to deliver transparency, as she so solemnly promised in the wake of Gov. Kitzhaber’s sudden departure, but worked at every turn to block and oppose it.

If Gov. Brown is recalled, who will succeed her? Secretary of State Bev Clarno or State Treasurer Tobias Reed? Explain the legal process.

In a nutshell, the Oregon Constitution says that the secretary of state fills a vacancy in the office of governor, whether or not appointed. The exception would be if they are acting in a temporary capacity, such as filling in for a disability. The latter is not the case here. Secretary Clarno is the fully sworn in secretary of state. Tobias Reed would only succeed to governor if the secretary of state is not available to do so. Ultimately, due to the one-party rule of the Democrats in Oregon, the courts may end up deciding the question. But, for sake of argument, even if Tobias Reed were to somehow replace Gov. Brown, the people of Oregon would have been heard. The message will have been sent, and those legislators that supported Gov. Brown will be on notice that the voters demand that they will be respected.

Any time someone calls and threatens to shoot members of your family and tells you to watch your back, you take it seriously. When it happened, our family discussed how we would react, and we decided, without hesitation, that in addition to taking precautions to protect ourselves, we would not be intimidated or curtailed in our support of the brave senators who had walked out. They had put everything on the line to represent their constituents’ best interests, and they needed our support. Eventually, the authorities did identify the suspect, who is now facing federal charges. We learned during the investigation that the suspect had held several official positions in the Democrat party. While I don’t blame Gov. Brown personally for these crimes, I do hold her responsible for her extreme political rhetoric, which I believe inspires people to threaten violence.