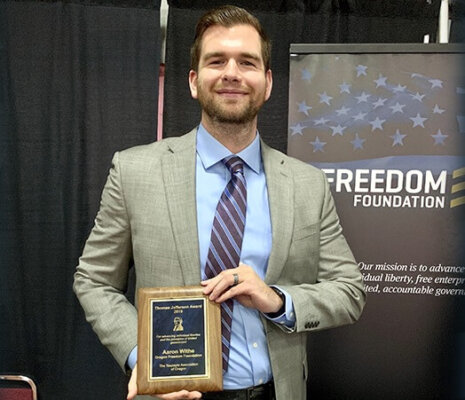 Earlier this year the Taxpayer Association awarded Aaron Withe their distinguished Thomas Jefferson Award for advancing the causing of liberty in Oregon. The award was given at the 2019 Liberty Rally. Aaron Withe is with the Freedom Foundation which had an incredible success in Oregon recently. Thanks to the Oregon Freedom Foundation, nearly 30,000 state government union members have exercised their rights to where their dues can be spent.

In 2018, the Freedom Foundation won a lawsuit against an Oregon public employee who objected to having their union member dues being used against her own spouse who was a sitting State Representative.

Aaron Withe said, “This award wouldn’t be possible without the incredible support of our donors, and all of our staff that work relentlessly on the front lines every day, he said. “Of course, I want to thank my wife as well, who stands by my side in this fight. This work we’re doing is a vital part of reforming this state. You cannot create reform until you remove the undue influence of government unions in Salem. It’s amazing to have our work recognized by others and is a testament to our success.”

The Thomas Jefferson Award is in their 19th year, making it one of the longest and more popular political-civic awards in the state.  Some of the previous winners have been Congressmen Greg Walden, Secretary of State Dennis Richardson and Lars Larson.

Kudos to Aaron Withe, Freedom Foundation and all those who help protect our civil rights.