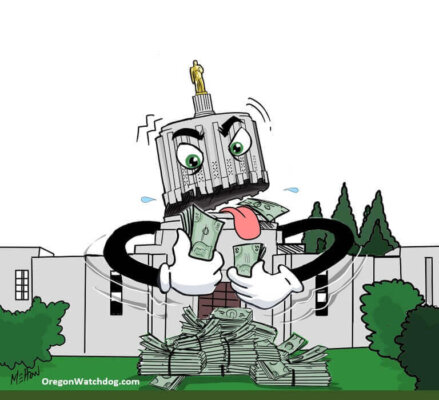 Politicians surprise lawmakers with 177-page amendment to be rushed out on Carbon Tax (SB 1530) without time to adequately read the bill.
By Taxpayer Association of Oregon
OregonWatchdog.com

At the near end of the day, Oregon politicians rolled out a sneak attack 177-page amendment to the massively complex Oregon Carbon Tax (SB 1530, also known as Carbon Cap-and-trade) and expected lawmakers to vote on it with less than 24-hours to read it much less have enough time for experts to understand what the 177-page amendment really does.   The Oregonian comments, “Democrats delivered a 177-page amendment to the bill late Wednesday, less than 24 hours before it was scheduled for a vote. Republicans objected to holding vote on the bill before they’d had time to digest the changes and before a public hearing on them.”

Before the 177-page amendment, the Oregonian considered this “…is one of the most complex and sprawling pieces of legislation ever to come before lawmakers” (Oregonian 6/17/2019).

Rushing and ramrodding 177-page amendments without giving lawmakers enough time to read the bill is an attack on transparency and open government.  This is why the bill should be considered during a normal Legislative Session and not during the super-short 35-day sprint Session.  Neither should there be an emergency clause on the bill blocking voters from have a public vote on the bill.

This carbon Tax (SB 1530 Cap-and-trade) is expected to be as much as a 72-cent gas tax increase and 13% heating bill increase for Oregonians.

Call your lawmaker to oppose this Carbon Tax

During the short 35-day Legislative Session (with limited public hearings) Oregon lawmakers are on the verge of speeding through SB 1530 a Carbon Tax Bill which will effectively raise gas prices by 72-cents and heating bills by 13%. California’s carbon tax, contributed to (1) electricity rates jumping 30% (2) nation’s highest gas prices and highest in the nation and (3) the state being rated the state with the #1 poverty rate in America. Oregon’s $700 million Carbon tax will create poverty!

You can also email your State Senator and State Representative at
www.OregonLegislature.gov