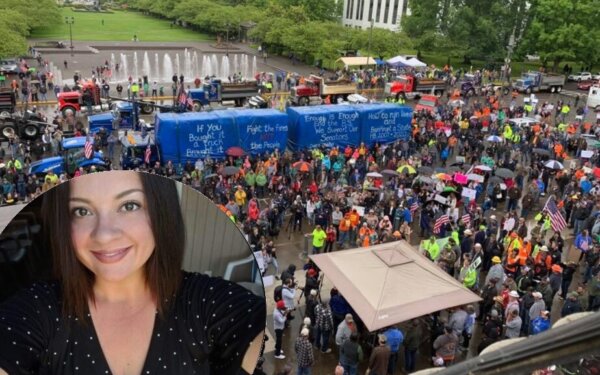 By Angelita Sanchez
Originally featured in the Oregon Transformation Newsletter,

Hi, my name is Angelita Sanchez. I’m a small business owner of a trucking company. I own three dump trucks, and I drive the trucks myself. I live in Sweet Home, Oregon. I also have three children. I am a sixth generation Oregonian, and Oregon is my State! It’s the land that I love, the land that sustains me, and a land I care deeply about.

When I realized cap and trade was being pushed by our state government, I had to speak up against it. I wasn’t going to let them take away anything from me without a fight. Something compelled me, and I couldn’t make it to go away. I have never been politically active, but this was too big of an issue to be ignored. I just had to fight.

That fight ultimately landed me a position on the board of Timber Unity as their secretary and made me a key spokesperson. It also gave me an opportunity to speak with the governor and even President Trump’s campaign to plead our case. The places it has taken me are quite surreal, but as long as I have a voice, I will push back on government over-regulation.

Now they have come back after us in the short session, but once again, our brave Oregon senators boycotted to stop it again. I will tell you that if Timber Unity wasn’t there pushing back, our Oregon representatives and senators would not feel empowered enough to fight with us. Now everyone in the grassroots and in politics are fighting together united against this supermajority. Even our county commissioners followed our lead and signed proclamations against this. As of last count, there are 28 counties representing nearly two million Oregonians that oppose cap and trade and refuse to implement it. All our voices are united.

We know that we can’t continue to have them walk, so we need to change directions. We will continue to fight, but we have to fight a different way now. It’s an election year, so we must vote. We are looking to register every person that’s unregistered, change voter’s party affiliations from liberal to conservative, and get good candidates running and elected. We must take back this state from the supermajority that is dead set on destroying us. We must continue to stand together united.

Timber Unity is not only about timber, but it’s about all of us. Yes, one logger started this, but cap and trade doesn’t discriminate. Timber Unity is truly a movement of the people, by the people, and for the people. It is my honor and my privilege to be a voice for so many, but I can’t do it alone. I need each and every one of you to stand up with me. We will change this state, and we will do it together.