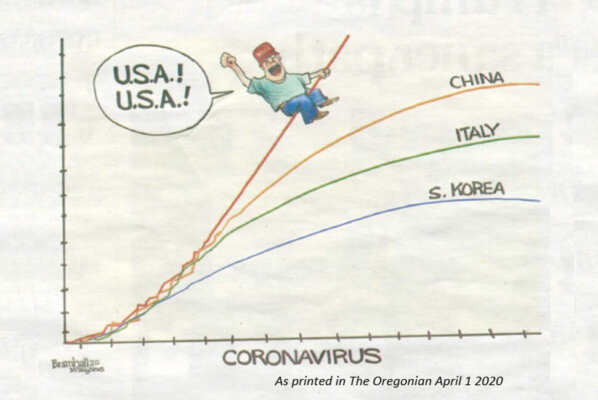 First, it takes a serious, tragic death toll and then somehow links it to the 62 million Americans who voted for the President as somehow being pro-death or just so stupid as to be not even be human.

Second, it takes a serious risk by basing the numbers on what open democratic nations are reporting on virus rates verses what communist and dictator governments are reporting. This is no joke. The falsehoods that China and Iran have already propagated have cost the lives of thousands.

For instance, because Iran censored their virus outbreak to protect their February Parliamentary elections resulted in a massive outbreak that led to Iran being the epicenter of the virus in the Middle East and directly responsible for it spreading to 10 other Middle East nations.

China denied, censored and hid from the world the critical life-saving fact, that the virus spreads from human-to-human and sat on it for over 40 days while people were dying and spreading it around the globe. I repeat, China said there was no human-to-human risk when it knew there was.  The World Health Organization repeated this in January while people were dying.  The same Chinese Communist government that lied repeatedly and in multiple different ways said just last month that their new infection cases went to zero in some days — an extraordinary figure that mainstream media has questioned.

This is no small matter. These figures are a matter of life and death in one of the greatest worldwide catastrophes of our lifetime.

Third, it seems that most of the cartoons we have been seeing from local papers have been lampooning America and Americans and letting the Chinese government get a free pass from criticism. Is this the new normal after the NBA Hong-Kong fiasco last year? Has China become exempt from comedy? Satire? Criticism?

China allowed 750,000 people to travel to America during the early virus outbreak without properly notifying everyone of what they knew about the virus. This is deathly serious.

This cartoon and the totality of others is propagating myths in a terrible season of death in our country.