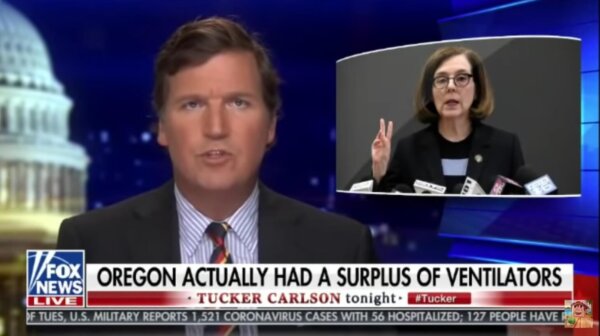 Tucker Carlson: What ever else is happening, this epidemic appears to be doing less damage than anticipated, and it’s receding more quickly. Not so long ago some of our leaders seemed on the verge of panic. On March 24th for example, Governor Cuomo of New York descended into a state of frenzy during his daily press conference. Cuomo dismissed the Federal assistances New York had received as “grossly inefficient”. “Tens of thousands of innocent New Yorkers were going to die, he said. “They will choke to death while Doctors do nothing to help them.”

Carlson: You pick the people who are going to die? It was effective theater, but it was awful. What a horrifying thought that was. As recently as last Friday, April 3rd, Governor Cuomo was threatening to use the National Guard to seize ventilators from facilities upstate. That’s how badly New York needed them – except it didn’t need them. As it turned out, New York has many more beds and ventilators than it needs.

Cuomo video clip: ”Every hospital has what they need to date.”

Carlson: So, miscalculations like the ones you just saw played out across the country in state after state. On March 14 for example, the governor of Oregon, Kate Brown, warned that her state’s 688 ventilators wouldn’t be nearly enough to handle the coming surge of Coronavirus cases. It turns out she got it backward. Oregon had more ventilators than it needed. So on April 4th Governor Brown shipped 150 of the machines to New York, which based on current trends, may not need them either.