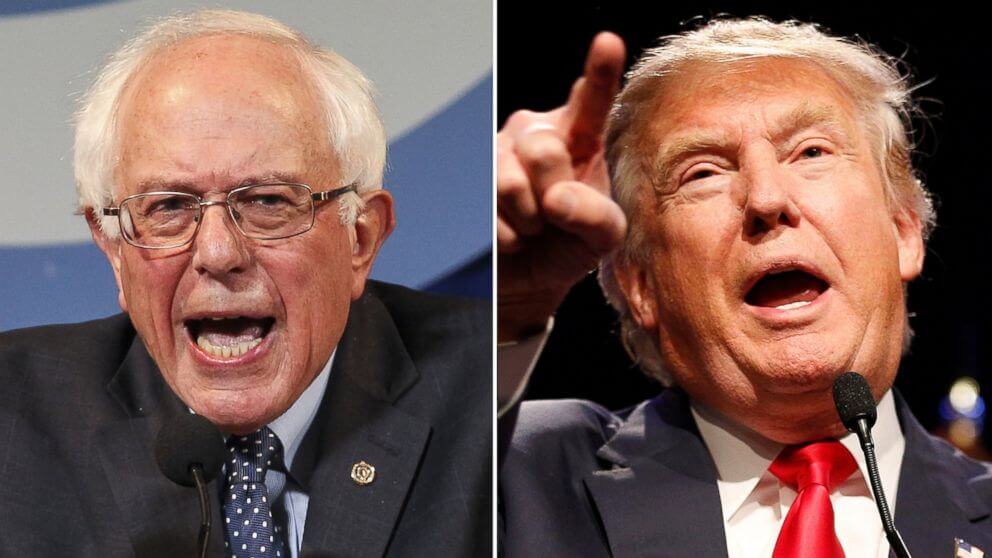 The democratic socialism of Bernie Sanders and the national socialism of Donald Trump can seem far apart to many party partisans, the kind of people who tend to get their information primarily from cable news rather than print media, but a closer look reveals a lot of overlap. When political parties follow these paths simultaneously, they come full circle, meeting each other in the big tent of big government.

Both Sanders and Trump speak in generalities, but lack policy substance. They energize their supporters with fear and resentment towards elites.

Both are long-time proponents of socialized medicine. Trump even defended single-payer policies during the Republican primary. At the August 6, 2015 GOP debate in Cleveland, Trump explicitly defended a complete government takeover of the healthcare sector, saying to a Republican audience: “It works in Canada; it works incredibly well in Scotland.” Trump then called for more government intervention in the healthcare sector.

This unique position for a Republican gave reporters much to follow up on and Trump later confirmed to 60 Minutes interviewer Scott Pelley in September 2015 “I am going to take care of everybody. I don’t care if it costs me votes or not. Everybody’s going to be taken care of much better than they’re taken care of now.” So Paley asked who’s going to pay for that. Trump said what any left-winger would say: “the government’s gonna pay for it.”

Trump avoided calling this single-payer, but he did reveal that his real plan was an expansion of Medicare, and he did what all advocates of socialized medicine do. Trump claimed it would be cheaper than Obamacare in the February 2016 South Carolina debate:

There’s going to a group of people at the bottom — people that haven’t done well. People that don’t have any money that won’t be able to be taken care of. We’re going to take care of them through maybe concepts of Medicare. We have hospitals that aren’t doing well; we have doctors that aren’t doing well. You cannot let people die on the street, OK? Now, some people would say, “that’s not a very Republican thing to say.” Every time I say this at a rally, or even today, I said it — once, it got a standing ovation. I said, you know, the problem is everybody thinks that you people, as Republicans, hate the concept of taking care of people that are really, really sick and are gonna die. That’s not single-payer, by the way. That’s called heart. We gotta take care of people that can’t take care of themselves. But the plans will be much less expensive than Obamacare, they’ll be far better than Obamacare, you’ll get your doctor, you’ll get everything that you want to get. It’ll be unbelievable.

An expansion of Medicare would have, of course, been a nonstarter for the Republican-controlled Congress Trump had to work with. It would certainly be something Sanders would start with, but it’s also hard to see Sanders getting a significantly different result than Trump on healthcare reform. Single-payer won’t pass in the U.S. Senate. I’ve already explained on the pages of the Oregon Catalyst why Trump’s opposition to a clean repeal of Obamacare made its repeal impossible. Sanders obviously wouldn’t want a clean repeal of Obamacare either. So like Trump, without a politically viable alternative, the Affordable Care Act would live on.

Bernie Sanders has long been an opponent of both illegal and legal immigration. He has been able to get away with that in a fairly pro-immigrant party because of the way migration has mostly become framed as racial identity politics in recent years. By using the language of civil rights in 2020, Sanders has camouflaged the fact that he’s of the old union left that has always sought to limit the supply of labor. Listen to Sanders explain to Lou Dobbs why he opposed immigration reform in 2007:

On trade policy, they are a perfect match. Both Trump and Sanders have long believed the federal government should impose heavy-handed regulations on Americans’ freedom to buy from abroad. 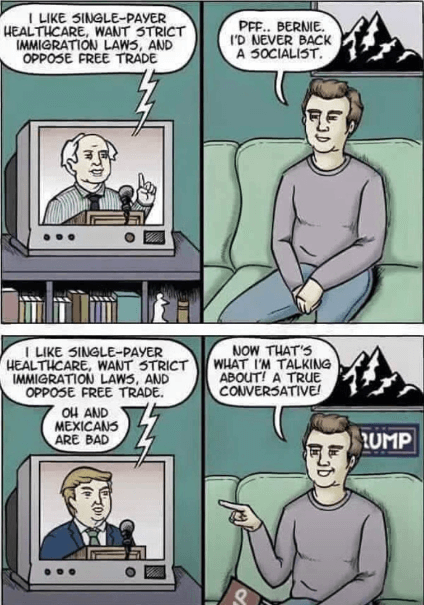 Sanders ultimately had to drop out of the Democratic presidential primary this week, because, like Trump, he could only mobilize a fractional following, lacking the ability to build a broad coalition beyond his intensely motivated base.  So, like Trump in 2016, just about any primary opponent that Sanders ran against could have easily defeated him in a one-on-one race.

Though Trump likes to brag about defeating sixteen Republicans in 2016, that was not a sign of broad support. The more opponents he had, the easier it would have been to win. Trump had consistent support from a third of GOP primary voters. The alt-right vote, many newly registered to vote in a GOP primary, gave Trump a floor, but it also gave him a ceiling. Meanwhile the real Republican vote was divided sixteen ways. Two-thirds divided by sixteen remained less than one-third as Trump’s mere plurality racked up delegates in winner-take-all states. Any of those sixteen Republicans could have easily beat the uninformed left-winger that ultimately won the nomination, had it been a one-on-one race.

And that brings us to the big difference between Sanders and Trump. Something happened to Sanders that has yet to happen to Trump. The party Sanders was trying to highjack united against him. Several primary opponents who had the money to continue and advance their own names chose to quickly withdrawal and endorse the most broadly unifying candidate.

As this suddenly unfolded, I can’t help but wonder what those defeated 2016 Republican presidential candidates thought. I suspect they all imagined how better this country would be had the other fifteen real Republicans done the same thing, rather than imagine themselves withdrawing for someone else.

Instead, the GOP nominated a big government guy. And on net, big government is what we got, from enhanced executive authority to fiscal irresponsibility.